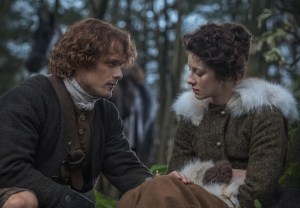 Claire Fraser has a whole lotta problems, and a witch is one.

This week’s Outlander finds Jamie’s inquisitive wife getting caught up in Geillis Duncan’s murderous drama, and it’s no real spoiler to say that Lady Broch Turach’s plight will get much darker before it gets better.

Because with Jamie away on a Colum-ordered mission and Claire getting hauled into a police carriage with her accused murderess of a pal, life at the end of the episode is nowhere near as bonny as it is at the start.

Those first few moments, by the way? Quite, quite bonny.

LIP SERVICE | Let’s start at the very beginning, a very good place to start… especially if you’re Claire, and your husband has a tongue accustomed to wrapping itself around Highland “rrrrr”s. At first, we only see Mrs. Fraser, naked, wrapped in sheets and enjoying life; a series of shots inform us that Jamie is closer to the foot of their bed and, ah, seeing firsthand how things are in Glocca Mora. A knock at the door distracts, but does not dissuade, young Fraser from his appointed duty (good lad); only when Claire has seen Brigadoon does he rise from the bed to admit a testy Murtagh.

Jamie’s godfather wonders what took him so long to answer the door. “Have your marriage duties made you sluggish?” he gruffly asks. Hold it right there, eternal bachelor Murtagh: Speed is not always an admirable trait in a husband. Anyway, the older man tries to ignore the scent of sex in the air and the fact that Claire is purring among the pillows like a calico in a sunbeam, and instead conveys the news that the Duke of Sandringham has arrived in the area.

HOPE SPRINGS ANEW | Jamie is psyched: The duke has the kind of power and influence that can help clear Fraser’s name of the murder charges. But Claire, flashing back to visiting the Rev. Wakefield with Frank, recalls that her first husband suspected that Sandringham was Black Jack Randall’s wealthy, secret benefactor. And seeing as how Horrocks told Jamie that Randall actually is responsible for Jamie’s alleged victim’s death… “You mustn’t trust him,” she says, snapping out of her post-coital reverie.

Jamie accepts his wife’s declaration as fact but still wants to try. If he’s free, he explains, they can return to Lallybroch. The puppy-dog joy in his eyes must be too much for Claire, because she agrees to help him. So they meet with Ned Gowan, who draws up a petition saying Randall is a slimeball in the hopes that the duke will have the captain reassigned somewhere far away. Once that happens, Ned says, he can argue Jamie’s case in court and likely get him pardoned. (Phew.) 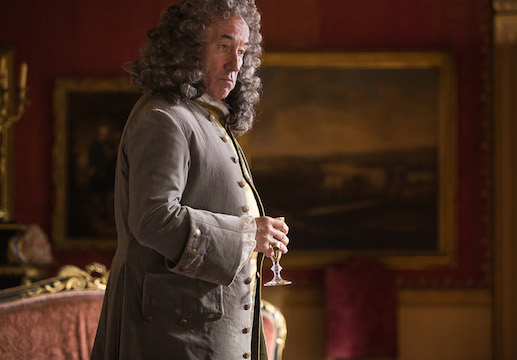 THE DUKE’S DUEL | Unconvinced that the petition will work, Claire sneaks away to the duke’s lodging and prettily threatens to out him as a Jacobite (aka traitor) if he doesn’t ease Jamie’s troubles. It works. Later, when Jamie and Murtagh arrive to formally present the document, Sandringham acknowledges that “shielding [Randall] from the consequences of his misdeeds sometimes feels like a full-time occupation” and asks just a little favor in return: that Jamie serve as his second in a pistol duel against Andrew MacDonald, to whom he has a giant, unpaid debt.

Against Murtagh’s wishes, Jamie agrees. And though the duel itself ends peacefully (both men miss their marks, likely on purpose), MacDonald’s hothead sons want the duke to pay his debts. Failing that, they just want to taunt Jamie about Sandringham’s preference for the male form. And before you can say “clishmaclaver,” Jamie is engaged in a swordfight with the three MacDonald boys. He represents himself admirably — dishing out a back-o’-the-knee gash that makes me a little lightheaded to watch — but winds up gasping on the ground, bleeding from a wound near his ribs.

The duke, wanting to avoid controversy, promises the bloody young Fraser he’ll see to the petition then skitters away. Back at Castle Leoch, Claire is full of quiet fury as she stitches her husband’s side. Anyone else getting the feeling that, had Claire not arrived in time to constantly patch him back together, Jamie eventually would’ve been reduced to a couple of Fraser molecules held together by rakish charm?

BAIRN BUSINESS | Before we reach the episode’s big climax (well, its other big climax), let’s back up a bit. While Jamie is dealing with Sandringham, Claire arrives in the castle kitchen with her hair up and her keep-it-real caplet on: Yep, she’s there to see Laoghaire. The teen at first fakes ignorance about the bad omen left under the Frasers’ bed, then slides right into referring to Claire’s husband as “my poor Jamie, trapped in a loveless marriage.” Claire slaps her (I don’t usually condone violence, but yes!) then offers the entirely unbelievable, “I shouldn’t have done that. Sorry.” (Side note: Something about the way Caitriona Balfe bites off “sorry” makes me giggle.) A spitting-mad Laoghaire admits that she bought the bundle of charmed sticks from Geillis; the shock of betrayal on Claire’s face is visible, but she recovers sufficiently to warn Laoghaire to stay far away from Jamie.

I’m going to skip the part where Claire has an interlude with Geillis’ gassy husband Arthur (you’re welcome) and go straight to where Claire finds her odd pal dancing, nearly naked, in the woods. The moves are reminiscent of the ceremony Claire and Frank witnessed at Craig na Dun in the 1940s, except Geillis is a lot less clothed and a lot more pregnant than the modern-day women were. When the rite is done, the redhead makes an inappropriate comment about her “nepples,” claims she didn’t know Laoghaire was gunning for Claire and reveals that the bairn growing in her belly isn’t Arthur’s — it’s Dougal MacKenzie’s. The dance Claire witnessed was a “summoning” to ask Mother Nature to arrange things so Geillis and Dougal (both wed to others) can be together.

A baby’s cries interrupt their walk home. Claire wants to go help it, but Geillis warns that the child is likely a sick one left for fairies by superstitious parents. Jamie later finds Claire cradling the dead baby to her and crying. “You’ve a kind heart, but you have no idea what you’re dealing with,” he tells her sympathetically, putting the tiny corpse back in its tree.

MOTHER NATURE DELIVERS | Back at Leoch, Dougal is raving in a fit of grief over the sudden death of his wife, Mora, at their estate — news that makes Geillis rather happy to hear. And later, at a big dinner for the duke, Arthur starts to choke and then collapses while all of Castle Leoch watches. Claire’s efforts to help him are in vain, and as he dies, she happens to catch Dougal and Geillis exchange a look of extreme pleasure. Oh, one more thing: Colum notices the look, too.

So the clan chief sends for Dougal, who claims to be in love with Geillis and happy that she’s carrying his child. Too bad, dude: You’re going home under guard. Guess who’s part of that guard? Jamie, who kisses Claire passionately and warns her to stay away from Geillis while he’s gone. (Side note: No, seriously. Will someone knit me those armwarmers?)

NO GOOD DEED GOES UNPUNISHED | But Claire, who clearly has forgotten what happened the last time she ignored Jamie’s directive to stay puuuuuuuut, gets an emergency note from Geillis and runs to her side. Problem is, Geillis didn’t write the message. The witchy woman, who Claire confirms poisoned her husband to death, also doesn’t want to leave home… so she’s an easy target when the wardens come to cart her away on suspicion of witchcraft. And because Claire’s there with her, Mrs. Fraser is roughly taken into custody, too.