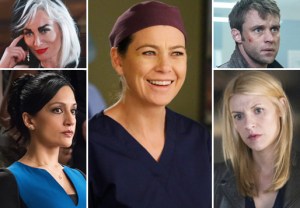 Question: Anything new and scoopy on The Good Wife? —Brandon
Ausiello: This is new, scoopy and curious: I hear CBS has quietly extended the contracts of the primary cast — that includes Julianna Margulies, Christine Baranski and Matt Czuchry — for two more seasons beyond the current sixth. That’s interesting coming off of Good Wife cocreator Robert King’s comments in last week’s Ask Ausiello, in which he hinted that even though he always envisioned the show ending after seven seasons, the decision, ultimately, rests with CBS. An insider, however, cautions not to read too much into the two-year thing, calling it “typical TV dealmaking.”

Question: Do you have any scoop to offer on Kalinda’s exit from The Good Wife? — ABZ
Ausiello: I heard she was getting killed off. Then I heard she was going to jail. Then I heard she was entering witness protection. Then I heard none of those things are true. Then I heard the killed-off rumor again. Then I saw the below photo Archie Panjabi tweeted Tuesday while on a break from shooting the season finale, and I thought to myself: “Self, that’s not the face of someone who’s about to shoot a death scene.” Does that answer your question, ABZ? 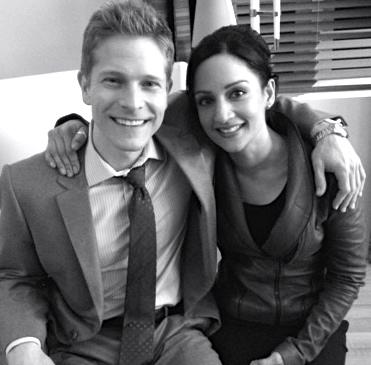 Question: If Once Upon a Time’s Cruella and Ursula fell through the portal at the same time as Maleficent’s baby, why didn’t they take care of her? Will we see what happened to them right after they went through? —Larry
Ausiello: Those questions — as well as the matter of Lily proceeding to age a couple decades while Cruella and Ursula didn’t — will be answered at the beginning of the winningly titled April 19 episode, “Sympathy for the De Vil.”

Question: I’ll take whatever you may have on The Flash during this pesky one-week break! –Liz
Ausiello: OK, here goes:
* At WonderCon, Danielle Panabaker hinted that we may see Caitlin dabble with her Killer Frost fate sooner than expected.
* There are no flies on Iris, who will very quickly glean that Eddie is hiding something from her. (And when she finds out about all who have lied to her? Think: angry + devastated.)
* The Grodd episode promises to be scarier — and funnier — than you might imagine.
* The inclusion of Captain Cold and Heat Wave in the Arrow/Flash spinoff series will affect The Flash’s storyline toward season’s end – and is one of the reasons Cold learned the Flash’s secret identity.

Question: Longtime reader and fan, first-time question-asker! I’m wondering what kind of Outlander surprises might be in store in the second half of the season for those of us die-hard book fans? Any crazy changes/additions we should prepare for? —Tracy
Ausiello: Creator/executive producer Ronald D. Moore recently told TVLine about a slight discrepancy taking place at the very end of the season. To keep it spoiler-free for those who haven’t read the Diana Gabaldon novel: There’s that thing that happens at a place that rhymes with “Schmentworth,” and then “instead of going to France and playing all the abbey scenes there, I chose to keep the abbey in Scotland so there is still a danger to them and a need to escape.” But, he reassures fans of the books, “the abbey scenes are still there.”

Question: I’d love a New Girl scoop! —Candice
Ausiello: How about some dish on a beloved cast member everyone thought might be leaving? Lamorne Morris assures us that Winston’s furry friend Ferguson will be seen before the end of the season. (Oh, did you think I was talking about Damon Wayans Jr.? Nope, he’s definitely gone at the end of the season.) 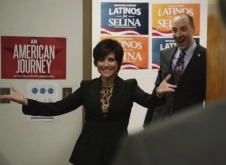 Question: I thought I read that Chicago Fire‘s Casey would be showing up in an episode of Chicago PD this season, and that it would involve Voight in some way. Did I imagine this or is it really going to happen?!? —Wendy
Ausiello: You’re not losing your marbles, Wendy. Casey’s troubled history with Voight will be palpable during the next Fire/P.D./SVU crossover event, airing April 28 and 29. “The problem is they can’t really bring it back up because I don’t think they’d get over it,” Fire star Jesse Spencer says. “The idea is that they’re going to be forced to work together in a situation that involves the [strip] club. So the tension between them is going to be palpable, but they have to aim for their objective first and try and put the personal stuff behind them, which is not going to be easy.”

Question: Is there a tiny bit of hope for a fifth season of our beloved Hart of Dixie? —Elisabeth
Ausiello: Answer’s still no.

Question: I would love to have some scoop on Gotham. I really need some spoilers about Bruce and Alfred. —Veronika
Ausiello: Be careful what you wish for, Ronnie. Gotham boss Bruno Heller told Matt Mitovich that although stabbing victim Alfred will be up and about when the Fox drama returns on Monday, he’ll have a dickens of a time stopping Master Bruce from discovering “something about his family that is earth-shattering.” 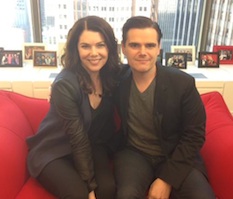 Question: Please tell me you’re moderating the Gilmore Girls reunion panel at ATX TV Fest in June! —Nick
Ausiello: I would if I could but I’m not! I (quietly) campaigned for the gig, but ATX organizers very respectfully turned me down. Trying to find out who they chose so I can wish them the best of luck!

Question: I’ve been a loyal TVLine fangirl for years now, but never e-mailed before. The Blind Item at the end of last week’s Ask Ausiello, however, is driving me nuts! Can you give us another hint, pretty please? —Taïs
Ausiello: I can tell you, unequivocally, that it is most definitely, 100 percent not anyone on a CBS show. I can also tell you that it’s…. Nope, that’s all I can tell you.

Question: Any scoop on HBO’s Looking wrap-up special? Will it be a handful of episodes? A movie? Something else entirely? —Seth
Ausiello: It’ll be a two-hour movie, and it’s scheduled to start shooting in September with an eye on a tentative January 2016 premiere.

Question: Please tell me that Nashville is going to be OK. When I heard that Connie Britton was joining American Crime Story, I immediately began searching for info about Nashville. But I’m not finding anything out. So what’s the scoop? —Hope
Ausiello: She’s a guest star in Crime Story, not a series regular. So one has nothing to do with the other. The ABC drama is currently holding steady at “could go either way” on our Renewal Scorecard, but it’s slowly creeping into “safe bet” territory. (At least this week.) 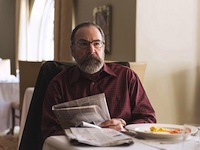 Question: Too early to ask about Homeland Season 5? —Gerry
Ausiello: It’s early-ish, but I’ve got a few nuggets for you. Season 5, which picks up nearly three years after the events of the Season 4 finale , will find Carrie and Saul somewhat estranged. “As we open the season, Saul is back in the CIA and Carrie is out of it,” exec producer Alex Gansa shares. “So that’s going to create, by definition, a distance between them.” Carrie will also be apart from another former colleague — Quinn. Speaking of the almost-lovers, Gansa admits the writers room remains divided on “how much of the connection between Carrie and Quinn… is actually romantic [versus] operational,” adding, “How much is just that they recognize each other so well? How much is the desire for both of them to move on past this job that they do. Those are the questions that we’re wrestling with. We wrestled with them last season. We’re wrestling with them again.”

Question: Arrow scoop, please! —C.J.
Ausiello: This just in: The title of the Season 3 finale is “My Name Is Oliver Queen,” as confirmed by EP Marc Guggenheim on Twitter. (And speaking of the finale, should fans be concerned about any of the cast missing from this picture?)

This AAnd That…
♦ My gut is telling me Shonda Rhimes is taking a “go big or go home” approach to this year’s Grey’s Anatomy finale, which will air in two parts and feature at least three, new, potentially recurring characters.
♦ Controversial opinion: I’m not convinced a Twin Peaks revival shepherded primarily by co-creator Mark Frost would be an unmitigated disaster. Would I prefer to have David Lynch involved? Yes, absolutely. But keep in mind, Lynch/Frost already 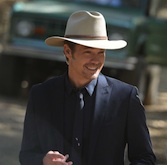 turned in all nine scripts, so DL’s fingerprints would still be all over this thing. And Lynch was one of many excellent directors who worked on Peaks‘ first 32 episodes (Frost being one of them). In summation, please don’t hurt me.
♦ On the eve of the its series finale, I think I’m ready to declare Justified one of the most underrated shows of the past decade. Who’s with me?