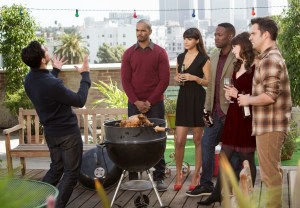 Damon Wayans Jr. has opted to exit the Fox comedy at the end of the show’s current fourth season, TVLine has learned exclusively.

“I’m so grateful to have had the opportunity to come back to New Girl in Season 3 to reprise the role of Coach,” Wayans tells TVLine in an exclusive statement. “Working with this incredibly talented and funny cast and crew has been one of the best experiences of my career.”

The actor’s exit is the latest twist in his circuitous New Girl experience. Allow us to recap: The Happy Endings alum starred in the New Girl pilot back in 2011, but his commitment to the aforementioned ABC sitcom prevented him from continuing with the series. When Happy Endings was axed, Wayans returned to Girl for a four-episode arc, eventually becoming a “special guest star” for the remainder of Season 3. Last May, ahead of Season 4, he was upped to full-fledged series regular in a one-year deal.

“We love Damon and are so lucky to have had him return for the past season-and-a-half,” New Girl executive producer Liz Meriwether tells TVLine. “We are working on crafting an exit for him that will leave the door open for many more returns, especially since Coach is our resolution to the upcoming ‘Who’s Jess’ Baby Daddy?’ storyline.” (We’re relatively certain that last part’s a joke.)

Wayans will appear in every remaining episode of the season; in this Tuesday’s Valentine’s Day-themed installment, Coach meets a possible love interest (played by Banshee‘s Meaghan Rath) on a Nick-planned “epic” bar crawl.

Weigh in on Wayans’ second New Girl exit in the comments.