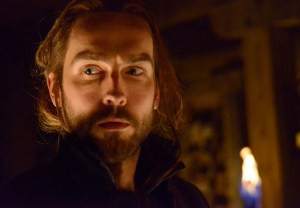 Walden noted that the sophomore drama faces “a very high level of difficulty,” juggling as it does relationships, mystery-telling, iconic historical characters and both period and contemporary settings. With an eye on the season-to-date and its waning ratings, she told TVLine, “The show got a bit overly serialized,” so their wish is to “return the fun” that was a hallmark of Season 1.

Given those concerns, Sleepy was MIA from Saturday’s announced renewals, though Walden and Newman are “hopeful” to grant an eventual pick-up.

Other topics tackled by Fox brass during their TCA Q&A:

* Also absent from Saturday’s renewal announcements was the long-running Bones, though that is due in part to the fact that Fox is still in talks with leads Emily Deschanel and David Boreanaz, whose pacts expire this spring. That said, the execs are “hopeful” the show will see at least one more season.

* On the topic of Utopia‘s spectacular “$50 million” implosion, Newman said, “We’ve always encouraged our team to take big, bold swings” but in this instance, he notes, “There was a lack of urgency [to the show] without any scheduled eliminations or contests. It was an admirable effort and it just didn’t work out.”

* Despite the success of last summer’s 24: Live Another Day event series, Newman said there are “no current plans” for more seasons, though there have been some “discussions” about revisiting the action-drama — “potentially” without Kiefer Sutherland, at least the next time around.

* Is the truth still out there? “It’s been reported, and it’s true, that we’ve had some conversations about [reviving] X-Files,” ideally with David Duchovny and Gillian Anderson, Newman shared. “But I have nothing that we can announce at this time.”

* In response to recent rumblings that Fox might get back in bed with former American Idol and X Factor frontman Simon Cowell, Newman confirmed, “We have been meeting with Simon” and they’d “love to be in business” with him again, but there is “nothing to announce” just yet.

* Fox invited Red Band Society producer ABC Studios to dial down costs a bit and crank out a few more episodes to air this summer, but was rebuffed. In retrospect, Newman said, the hospital drama’s “creative team did a great job, the show felt soulful and truthful and like there was integrity to it. It just didn’t resonate on air with our audience in the way we would have hoped.”