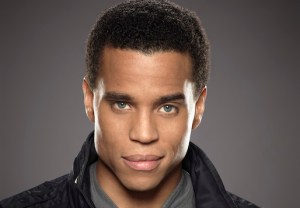 Remember your chief gripe about the first two seasons of The Following? It was Michael Ealy‘s issue, too.

After watching a few episodes of Fox’s serial killer drama, “I didn’t find the police work to be substantial. That’s just full disclosure,” the actor says candidly. “I kinda checked out.”

Cut to the current season, when Ealy — last seen as gentle android Dorian on Fox’s cancelled Almost Human — was presented with an opportunity to play a new, terrible murderer on the Kevin Bacon-led thriller.

“I watched a couple of episodes” before taking the gig, he says. “Like good showrunners, they made the connections, tightened things up, and I think the show got a lot better.”

With that out of the way, Ealy could focus on figuring out exactly how warped his character, Theo, who makes his debut in tonight’s episode (9/8c), was going to be. (Are you shocked that the answer to that is “very”?) TVLine chatted with Ealy about his introduction to Joe Carroll’s world and how tough it was to flip Dorian’s off-switch forever.

TVLINE | You had a good idea of Theo before you agreed to the part?
Absolutely. What’s been interesting in terms of playing Theo, Theo is a serial killer who does not want the attention. He doesn’t want followers. Yes, he’s a narcissist, but he doesn’t want followers. He doesn’t believe in bringing the attention to himself. I could relate to that as an actor. [Laughs] At the same time, I kind of respected it because for him, as it is with me, his craft is personal to him. It’s a passion of his. If you treat it as such, you don’t necessarily feel the need to be adored for it. You can find self-satisfaction in just doing what you do. For him, it’s killing. For me, it’s acting. Very different. However, like I said, that was my in.

Also in doing the research, you realize the main difference between Theo and myself is simply a genetic code. And that is disturbing… The idea that I could have been born with this genetic code and had the same desire to kill, to take life with no fear, all of that is disturbing — and yet so fascinating. Because technically, we’re all predestined to do something, good or bad.

TVLINE | What can you tell us about Theo? Is he impulsive? Calculating?
Theo is extremely calculating. What I’ve discovered, over shooting these episodes, is he’s always got a plan… Let’s say he failed in getting what he wants. You’re not going to see him sweat it too much, because he’s got another plan. And he always, always ready to just jump into the next plan. But at the same time, there’s a couple of unfortunate souls that come across Theo at the wrong time, and they’re just innocent bystanders. Unfortunately, they catch him at the wrong time.

TVLINE | Is Theo someone who can play nicely with other killers like Daisy and Mark? Or he is a one-man show?
Oh man, I can’t wait for you to keep watching. He’s definitely a loner. He’s a one-man killer. He’s got his own operation. He doesn’t need anybody else. That doesn’t mean that nobody else will be thrown into his mix. But he is self-contained… Anybody who gets in his way, it’s on them. You take your chances if you want to. [Laughs] But it’s a mistake.

PHOTO | See the First Shot From the Scream Queens Set!

TVLINE | He’s the polar opposite of Dorian. Was that something you were looking for after Almost Human ended?
Dorian was, and always will be, a very special character in my heart. I really wanted to play him for five years. And it hurt when that was taken from me. It hurt bad. The bad thing would’ve been to try and do Dorian again right away… It would have been a bit sad and pathetic to try and play Dorian again. I feel like people really connected with that character. I can tell by my Twitter feed that people connected with that character. And no one connected with him more than me.

One of the blessings, if you will, of being given the opportunity to play Theo was walking away and just delving into something new and interesting and nothing like Dorian. Dorian seeks humanity that is in us all. And Theo lacks humanity in so many ways. That doesn’t mean he’s a total machine, and that’ll come up later in the season. But empathy is not something that he can comprehend.

Press PLAY on the video below for a sneak peek of Ealy’s first episode.