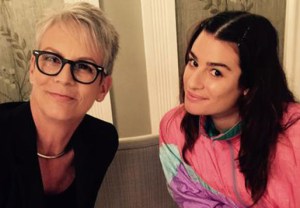 The creator of Fox’s upcoming comedy-horror anthology series on Wednesday tweeted a picture of his leading ladies, Jamie Lee Curtis and Lea Michele, together on set — and we’ve got a few questions.

For example, what’s up with Michele’s dated windbreaker? Unless the former Glee star is going though a retro fashion phase, could this be a hint that Scream Queens is going to be set in the ’80s or ’90s? It’s no secret that Murphy loves playing in different time periods — see American Horror Story Seasons 2, 3 and 4 — so it wouldn’t surprise us one bit.

Check out the photo of Curtis and Michele in full below: 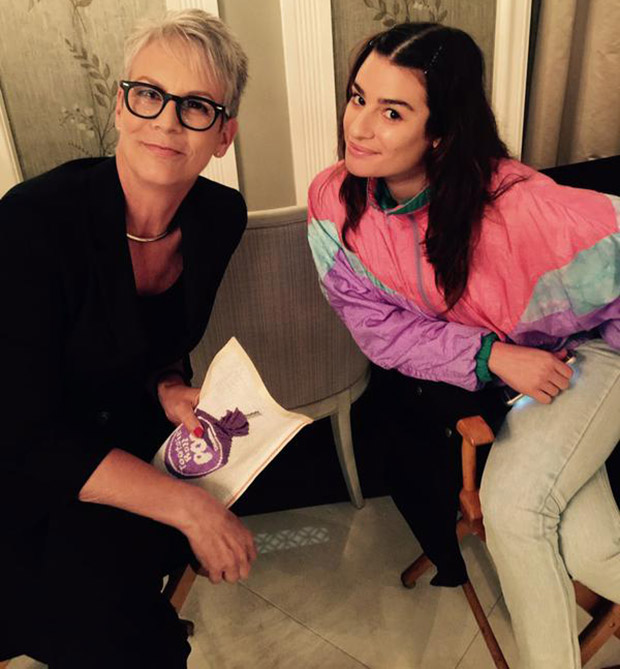 * ION announced Wednesday that its Stateside broadcast of Saving Hope episodes will premiere this fall.

* Jeremy Clarkson’s contract as presenter for BBC’s Top Gear will not be renewed, in the wake of his physical and verbal altercation with producer Oisin Tymon. (Read BBC’s full statement here.)

* Leah Remini: It’s All Relative has been renewed for a second season by TLC.

* SundanceTV’s Behind the Story With the Paley Center series will premiere Tuesday, April 7, with excerpts from the Parks and Recreation cast’s recent PaleyFest appearance. Subsequent episodes will feature the panels for The Mindy Project, Mad Men, The Big Bang Theory, Orange Is the New Black and Masters of Sex.