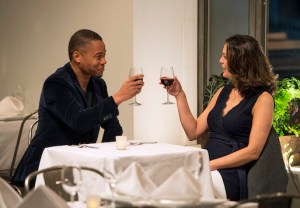 Yes, Cuba Gooding Jr. premieres on Forever next week as Jo’s new love interest, and yes, his character is quite wealthy.

But no, we’re not going to make a “Show me the money” reference. (Besides, Henry would never get it, anyway.)

The Oscar winner is coming off a role in the critically acclaimed feature film Selma and he’s headed toward a buzzy part in Ryan Murphy’s American Crime Story, which begs the question — no offense to Dr. Morgan & Co. — of how, exactly, did he end up on an ABC procedural about a medical examiner who can’t stay dead?

The answer’s so simple, even Det. Hanson could figure it out: Gooding’s agent sent the script, and “I thought it was fun,” the actor says. “Ioan [Gruffudd]’s and Alana [de la Garza]’s characters were really interesting, with that whole immortal aspect. I like stuff like that.”

Gooding’s character — Isaac Douglas — is a prosperous philanthropist who starts his three-episode arc as a murder suspect… and ends it as Jo’s honey.

“When they told me that I would be this philanthropist that comes in, is suave and charming — they said all the right adjectives,” he says, laughing.

In advance of Gooding’s Forever debut next Tuesday (ABC, 10/9c), TVLine chatted with the actor about wooing Det. Martinez, (briefly) cozying up to Empire‘s Cookie and readying himself to play one of the most notorious defendants in American Crime history: O.J. Simpson. 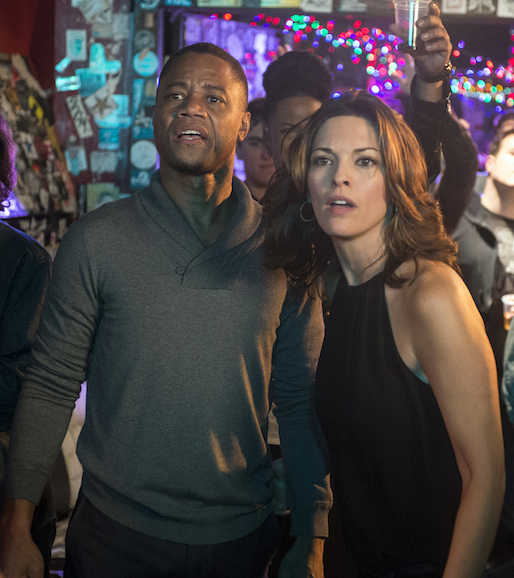 TVLINE | Tell me a bit about Isaac. When we meet him, the police think he’s involved in a crime they’re investigating. How do he and Jo strike each other at first?
It’s the opposites attract thing. She’s all business, and he’s presenting this gift to this organization, and she sees him as a suspect. He thinks the whole idea of it is absurd, and one thing leads to another and the chemistry clicks. Just like anything else, I think when you find romance and love it’s never where you’re looking for it.

TVLINE | How does Henry feel about Isaac? After all, Forever has a lot of fun playing with the Henry-Jo relationship.
Yeah. That’s respected in a really interesting way… [Henry and Isaac] don’t come across as rivals. They come across more as respected gentlemen. That is what I thought was really clever and enticing to be involved in that dynamic.

VIDEO Agents of S.H.I.E.L.D. Sneak Peek: Skye Pumps May’s Ex for Calvary Scoop
Well, you have got to see. Why would I give everything away? [Laughs] I wouldn’t need to watch, I’d skip those three episodes if I knew where I was going.

TVLINE | You know I have to ask.
I know you do.

TVLINE | Does Isaac interact with any of the other members of the team?
Of course. Yeah. There’s some really good, fun stuff going on. I think my favorite episode so far involves a karaoke scene. That’s all I’ll say about that.

TVLINE | Is your character’s story left open-ended?
I can’t tell you any of that. You’ll have to watch.

TVLINE | Would you, as an actor, like to come back if there’s an opportunity?
You know, I always leave my options open. Like, I said to them, I’m a fan of their show, I’ve watched it, and when the season’s finished if they have another season… you never know. I did an episode on Empire as well, and I said the same thing to them. I said, “You know we’ll just leave it… let it live where it lives until the next opportunity.” 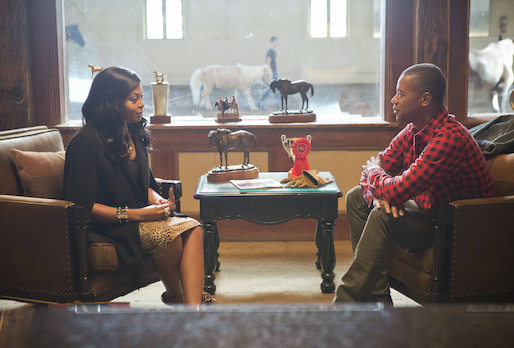 TVLINE | That was actually my next question — have you had any conversations with Empire about coming back?
Well, it’s funny, because [Empire creator] Lee Daniels and I are best friends, and we talk incessantly, and that role came about because an actor that was cast had a family emergency. It was a three episode arc and [Daniels] said, “Listen, can you just fly in tomorrow? Because they have to start filming tomorrow, and we’ll just make it the one episode.” I said, “OK”, and I did it, and I left.

TVLINE | I was wondering, because the appearance seemed brief.
Yeah. It was supposed to be longer, but my schedule didn’t allow me to stay around Chicago for several weeks.

TVLINE | You’re about to play O.J. Simpson in Ryan Murphy’s American Crime Story. Did you and O.J. ever meet?
I met him way, way back before the murders took place, at one of the nightclubs in L.A., and we just had a brief conversation. It’s one of those conversations, like when you meet any celebrity [or] athlete. Actors want to be athletes and athletes want to be actors. It’s just one of those things. It’s like “Oh, there he is. He puts his body on the line for his job”, you know? I remember how he was very charismatic and just had people trailing him.

He mentioned a film I had been in, Boys in the Hood, it was just that time period in my career where it’s like everybody was coming up to me saying things, you know, but it was very brief like that. I didn’t know him.

I remember where I was the day the Bronco was chased down by the police on the 405. I remember watching a hockey game on TV at a house with a bunch of people, and they all had turned the TV to watch. It was all of that time period I remember very vividly. So, it’s going to be interesting — all of the stuff that I’m learning about surrounding the trial and the police investigation and all of the insanity of it. It’s really going to be one of those series where people watch with their mouths agape, because we’re not making a statement of innocence or guilty as much as we’re making a statement of how absurd the events surrounding that trial were.

TVLINE | Do you have an opinion as to whether he did it?
Oh sure. Absolutely. And when you do a character you have to give them a mindset and then stick with that one mindset, you know?

TVLINE | And you’re going to tell me what that opinion is?
No. Are you kidding? [Laughs] I like the idea of people watching this series one week going, “Oh, I think Cuba [thinks he] did it,” and then the next week going, “I think he thinks he’s innocent.” …It’s the minutiae of when he answered the phone. How was his face when he listened to the information? What did he say to his family behind closed doors? You hear all of that, and you see it. So, I need you, the audience member, to wonder, “What is the intent?” As an actor, now I get the ability to walk you through those things.