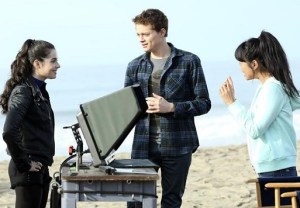 With their relationship on life support, Bay’s decision to visit Emmett in Los Angeles on Tuesday’s spring finale of Switched at Birth (ABC Family, 9/8c) could be just the thing to save it — if her beau wants to give it another shot.

“This whole episode is about them working it out and whether or not he is willing to make it work,” star Vanessa Marano tells TVLine. “I think he’s going to surprise everyone with his decision of where he’s at mentally.”

But even if Emmett does what to salvage their romance, is there still room for Bay in his Southern California world of film school and new friends?

“Where Emmett thinks his life is going at the beginning of this episode is not where it will end up” at the close of the hour, Marano teases.

In case that ominous-sounding answer wasn’t clear enough, the actress hints at a season-ending twist below that will upend viewers’ expectations.

TVLINE | I’m guessing she hasn’t told Emmett that she’s coming to LA.
Why would she do that? That’s stupid! [Laughs] In typical Bay fashion, she’s like, “I’m going to surprise him. That’s a good idea, and it’ll all work out.” [Laughs] Bay goes into every situation thinking, “What’s the worst that could happen? It’s all going to work out.” And, usually, it always doesn’t go the way she’s expecting.

TVLINE | What’s his reaction when she arrives there?
She actually shows up on his film shoot for his student film. So she shows up on the beach, which is the way you want to show up in Los Angeles. That’s really cool. I’ve never shot on the beach before. It was super awesome. I’ve never really played LA for LA in that way before. She shows up there and is like, “Surprise!” And he’s like, “Ahhh. Surprrise. Wasn’t expecting this to happen.” But at the end of the day, the two of them love each other so much that even if they are going through something, they are happy to see one another. 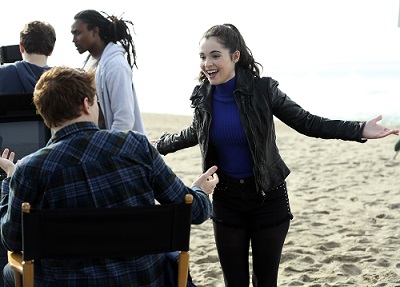 TVLINE | She’s come to work things out, but he’s been so distant lately. Is this a one-sided fight for their relationship?
It seems that it is that way. I don’t think she’s at a place where she’s expecting that. That’s why she wants to go out to Los Angeles to see him. She feels like, “If he sees me face-to-face, he’s not going to be able to avoid me.” This is the Emmett that was so trying to get back together with her after he cheated on her, who has done everything and been at her beck and call and said that they’re meant to be, they’re written in the stars. In her head, [she thinks], “If he sees me in person, that Emmett will come back,” not this Emmett that’s like, “I can’t understand the situation not being black and white” and the Emmett that’s ignoring her phone calls and being distant, awkward and weird. “If he sees me in person, it’s all going to be better.” Again, that maybe isn’t the most thought-through idea, but she wouldn’t be Bay if she thought it through.

TVLINE | What is Bay’s take on Emmett’s new friend Skye?
Oh, she ain’t happy about that! But from her perspective, how could you be? She has every right to be jealous of this girl. A) This girl clearly has feelings for her boyfriend and has made it known, and B) this is a boyfriend who has cheated on her in the past. … They’ve been able to get over the damage, but it doesn’t make it go away. You can forgive, but I don’t think you ever really forget.

TVLINE | Do you get a sense of closure one way or the other at the end of the finale about their relationship?
[Pauses] Again, you think that you get closure. That’s the thing. Three-quarters into the episode, you think you know how it’s going to turn out and then it takes a turn in the last scene in a way that it’s like, “Oh, I don’t know what’s going to happen now.” We just had this resolve — whether it be a negative or positive resolve, I’m not revealing — but by the last scene of the episode, it’s like, “Oh, that didn’t even mean anything because this turn just happened.”

“Bemmett” fans, are you nervous for the finale now? Hit the comments with your theories on what’s in store!