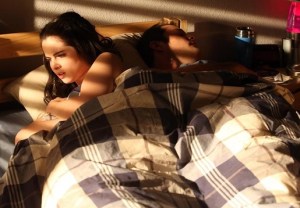 A night of drunken fun led to Switched at Birth‘s most controversial storyline yet on Tuesday night.

The episode opened with Bay awaking naked in bed next to her ex-boyfriend Tank with no memory of what happened between them. As the hour unfolded, it was revealed that the two had sex — but was it consensual?

Bay wasn’t so sure since she had blacked out, while Tank argued that she never said no. “But did I say, ‘Yes’?” she wondered.

With more people set to find out next week about what transpired, TVLine talked to executive producer Lizzy Weiss about grappling with such a “complicated” issue and Bay’s feelings on what happened to her. The EP also previews the fallout on Bay and Emmett’s relationship.

TVLINE | Consent and rape are not an easy subject matter; everyone has strong feelings. What made you decide to tackle this?
We were seeing it [discussed] everywhere in the fall for the age group that we’re writing for, and once we started talking about it, a lot of people in the room contributed personal stories about something similar. We decided that it was something we should probably deal with [with] one of our girls. We knew right away that we wanted to do it in the most up-to-date way [with regard to] what’s happening on campuses today, which is that the rules are changing and the paradigm is changing for what is considered consent. When does “yes” mean “yes”?  When can you trust that? And how do both girls and guys get caught up in the new rules in ways that can be real damaging to everyone involved?

TVLINE | I was watching the 20/20 special about the Vanderbilt case before I watched this episode. How much did you take from what’s in the news?
I don’t know that case. Is that a horrible one?

TVLINE | It’s definitely much more black-and-white than what you did.
OK, yeah, that’s the perfect way of putting it. We knew we didn’t want to do one that was black or white. We all read articles over the past couple of years that were very clear and horrible and infuriating from the point of view of the victim, and we knew that we didn’t want to do that. We didn’t want it to be something that was pretty obvious where your heart should lie. We wanted to do one that was, frankly, probably more common [in regards to what] goes on today, which is a little more murky. I just read the story of a Stanford swimmer who was [allegedly] raping an unconscious, intoxicated woman on the quad. We didn’t want to do that story. We wanted to do one in which the issue of content was a little murky.

TVLINE | What were you hoping to get out of it by making it more gray?
Honestly, truth. I do think that most of the cases are more similar to the one that we show, which is guys who are raised well, good guys who aren’t at their core evil people, guys who think that they’re behaving OK and wind up making really bad choices that follow them for the rest of their lives and, of course, ensnare the woman as well in something that will follow her for the rest of her life. But I also think it’s more relatable. When you read these horrible stories, it’s easy to say, “Oh, that will never happen to me because…” Or it’s just easy to keep it at arm’s distance so you don’t connect with it, and you just think, “That is so horrible. I hope they put those guys away. And that poor girl.” I wanted it so that everyone involved – guys, girls, parents – would say, “Wow, that could happen to me.” “That did happen to my friend.” “That can happen to my son.” Something that makes everyone a little bit more scared rather than nauseous. And I connected with the story as a parent. I have a daughter and a son, and I see it as a parent of a future college kid. I think about all the things that I want to tell both my daughter and my son as they enter college and a world with drinking and parties and making good choices, so that they don’t do something that follows them the rest of their lives.

TVLINE | Talk about the decision to put someone as likable as Tank at the center of this conflict.
He’s incredibly likable and charismatic as both an actor and a character, so that was essential. I didn’t want to do it with a character that you just met and you don’t have any relationship to and you could easily throw away as a bad guy. I wanted it to be complicated, because that’s how real life is. We did look at a couple of cases – not that Vanderbilt one that you referenced, but others – and the specifics of them and the texture of real life on college campuses with what happens at parties and texting and friends involved. Everyone has their point of view on what happened. It’s not always clear, and throwing in a guy who has good intentions but still may make bad choices – it doesn’t mean he’s perfect – makes it complicated and real and controversial. We’ll see if people think it’s assault or if they defend Tank and say, “She didn’t say no.”

TVLINE | Some characters come down pretty hard on the side that this is rape. Does that change going forward as more about that night and Bay’s feelings are unraveled?
No. The only one that seems to come down pretty hard is Regina. We needed a grown-up, if you will, to identify it as something beyond cheating so that Bay’s perspective could shift from, “Oh, God, I cheated on my boyfriend” to “Maybe something worse happened here beyond just ‘I cheated.'” So Regina doesn’t change her mind. But we do, in Episode 6, get the family involved. All of the parents find out, and we open it up to other characters who have to find out. It explodes and everyone has an opinion about it in Episode 6.

TVLINE | At the end of tonight’s episode, Bay just wants to forget about it and move on. What can you say about how her mindset is going to change?
We all had read about about Mattress Girl, this rape activist at Columbia University. We talked about her a lot. We wanted someone to be loosely inspired by her, and that’s the rape activist who shows up in Episode 6 to talk Bay into going forward and becoming part of the movement. And we were really clear that we didn’t want Bay to jump on that bandwagon. That’s not who she is as a character. She’s not political. We wanted to take her on the journey of, “I really don’t want to talk about this” and then slowly get to the point, in particular with Katherine’s encouragement and her personal story, of realizing, “I have to speak for myself. I have to articulate what I think happened for this to be put to bed. I can’t hide anymore because it’s out there and everyone knows and everyone has an opinion about it. I need to put myself forward and say what my opinion is.”

TVLINE | What does this mean for Bay and Emmett? How does this affect their relationship going forward?
Great question, and that’s Episode 7. [Laughs] The episode after the two-parter is almost the third [part]. That’s specifically, completely dedicated to Bay and Emmett dealing with it. Emmett finds out, and he has to be honest about how he feels and he has a lot of issues with it and the fact that it was her ex-boyfriend, the fact that she was drunk, the fact that they were in a big fight. So he has to go on a journey, as well, to put this to bed, if you will.