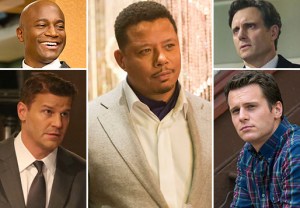 Question: I love TVLine and that I check it every day. Also, I’m loving Empire so much. Got any scoop on the season finale? —Chandler
Ausiello: Chandler, just a heads up that three out of four dentists agree you should check TVLine a minimum of six times per day – so you might need to step it up a bit. With that out of the way, I’ll pass the mic to Empire showrunner Ilene Chaiken, who has this to say about the end of Season 1: “A lot of the big questions that were raised in the pilot are not going to conclude — because nothing ever concludes in life — but there are going to be resolutions, big moves, decisions and stories that pay off. And in the course of that, everything is going to change. Everything will be poised at the end of the season to begin anew, with dynamics that are shifting and just as extravagant and flamboyant as they were in the beginning —maybe even more.” Specifically, Chaiken adds, “Be prepared for some things to happen in Lucious’ life that nobody ever expected.” And if you’ve detected an unspoken undercurrent of Cookie pondering the cruelty with which Lucious treats the people in his life — his sons and even Anika, in particular — the EP says you may be on to something. “That is very much going to come to a head in these final episodes — in a really consequential way for Lucious, and even moreso for Cookie.”

Question: I’ll take anything you can share on Bones. It’s been awhile since the show was last on. —Cassidy
Ausiello: It’s back Thursday, March 26 and showrunner Stephen Nathan promises “big changes are afoot” during the second half of Season 10. The big news: “We will be dealing with Booth’s gambling problem,” previews the EP, “and it will have repruccussions for Booth and Brennan’s marriage that will not be easily resolved.” What’s more, “We will also be catching a glimpse of Angela’s real name,” Nathan confirms.

Question: Revenge is on fire this season! Do you have any scoop? —Julius
Ausiello: I don’t think you realize how perfect your question is, Julius. Episode 20, appropriately titled “Aftermath,” deals with the fallout from a devastating fire at a yet-unknown Hamptons residence. What I do know, however, is that both Emily and David will try to enter the home looking for answers — and they’ll both be turned away by the authorities.

Question: What’s going on with Taye Diggs on The Good Wife? I was all excited about his casting and he has just disappeared. What gives? —Bonnie
Ausiello: EP Robert King confirms that Diggs’ legal eagle Dean is still employed at Florrick-Agos-Lockhart, although the actor’s starring role on TNT’s Murder in the First has made the character a scarce presence. “It always comes down to their schedules,” laments King. “But we love Taye Diggs.” (In other Good Wife MIA matters, here’s the skinny on where Robyn’s been.)

Question: I was happy to read that Gary Cole is headed back to The Good Wife as Diane’s hubby. Any scoop? —Tarik
Ausiello: He returns this Sunday for the first of several episodes, during which the couple will “go on a surprising tangent,” teases Christine Baranski. “We go out hunting together, and I meet up with a Republican billionaire [played by Oliver Platt].” The actress adds that the ideologically opposed duo will once again run up against some conflict. “It’s so great to see that two people can be married and disagree politically,” she says, “and have a political discourse that doesn’t derail the relationship.”

Question: Do you have any scoop on the season finale of Grimm or anything for the episode(s) leading up to the finale? —Jordan
Ausiello: Co-creator David Greenwalt promises that the next few episodes will show us “Juliette like you’ve never ever seen her, and the captain like you’ve never ever seen him. Just wild stuff.” “Wild” as in “we once hooked up and now we’re moving toward it again?,” we wonder. “Always a possibility between those two,” co-creator James Kouf cagily allows. BONUS SCOOP: The soon-to-arrive new prince, Kenneth, “is much more direct” than Viktor, Greenwalt says. And the recently added Royal and Adalind “have a very funny conection” that “goes to a place you won’t see coming,” Kouf adds.

Question: I’m dying for any scoop on Looking! —Renata
Ausiello: Gay hookup ap Grindr plays a supporting role in the March 22 Season 2 finale, which, not so coincidentally, is very much focused on Kevin and Patrick’s nascent relationship. Also, the C-word is thrown around quite a bit. Just a heads-up.

Question: This guy would love some Scandal scoop! —Kyle
Ausiello: Hopefully this guy digs Girls, because I’ve got Guillermo Diaz dishing best he can on Lena Dunham’s mystery role, airing later this month. “She’s really sassy,” is all he would say about Dunham character. As for the guest star herself, “She got used to speaking really fast, like we do on the show, very easily,” Huck’s portrayer reports. “She’s a huge fan of Scandal, and we’re all a big fan of Girls, so it was exciting to have her on set.”

Question: Any scoop you can share on Scandal? —Logan
Ausiello: If you thought that Virginia senator Susan Ross — regardless of her bout of foot-in-mouth — was a shoo-in to replace Andrew as VP, think again. As POTUS himself, Tony Goldwyn, tells us, “There are real complications about Susan Ross. So, I can’t say that it’s a done deal. When we last left Fitz, that was his decision [to pick her], but it might not be as easy as it seems.”

Question: Do you have any more news on your latest Blind Item? You said it was not Jess from New Girl, or Liv on Scandal. Any other hints? —Gina.
Ausiello: Huge hint coming your way right… now. (Also, get with the proverbial program, Gina.)

Question: Do we have any idea who knocked up Once Upon a Time’s Maleficent? —Andrew
Ausiello: Series co-creator Eddy Kitsis says that the baby daddy will be revealed, “If there is one.” Meaning? Meaning, he notes, “This is a show where dwarves are hatched from an egg.”

Question: I’m looking for some Merry Men scoop! Any info on either Once Upon a Time‘s Will Scarlett or Robin Hood? –Brittani
Ausiello: During this second half of Season 4, “We’ll get a look at a bit of the past between Will Scarlett and Robin Hood,” co-creator Adam Horowitz shares. “We’ll learn they had adventures both in and out of Sherwood Forest.  And no look at the Merry Men would be complete without a return of the Sheriff of Nottingham.”

Question: Do you have any info at all on the upcoming season of Suits? —Jack
Ausiello: While Mike and Rachel’s engagement doesn’t mean we’re in for “the season of wedding planning,” the upcoming nuptials “will bring up issues in their relationship,” executive producer Aaron Korsh previews. On a different front for the couple, “[Rachel’s father] Robert Zane is going to become involved in a legal case with Mike and that’s going to have some impact on all of their relationships with each other.” BONUS SCOOP: The show is looking for an actress in her late 30s to early 60s to play Harvey’s new, no-nonsense shrink.

Question: I was wondering if you had any scoop about Steroline on The Vampire Diaries? —Amy
Ausiello: As you might have gleaned from our sneak-peek photos, Amy, Stefan and Caroline are hitting the “pause” button on their relationship while he attempts to pull her out of her new downward spiral. That said, he’ll be getting some assistance from an unexpected — and highly reluctant — source: his brother! “Damon wants to protect Elena and his brother and make sure there’s gas in his Camaro. That’s about it,” Ian Somerhalder says. “So helping Caroline is really just Damon’s way of trying to help his brother.” Well, isn’t that… sweet?

Question: Got anything on Arrow? —April
Ausiello: Ra’s al Ghul’s offer to Oliver to replace him as the leader of the League of Assassins will shake things up for his daughter Nyssa in a big way. “She’s no longer heir to the demon,” notes her portrayer, Katrina Law. “She no longer has her lover, who I’m sure she was thinking about keeping around forever. She’s essentially lost everything. For the first time in her life, she is vulnerable and she feels weak and useless; it’s very jarring. You’re going to see Nyssa trying to figure out who she is and what she stands for now.” And that journey could lead her to find an ally in fellow daddy issues-plagued Laurel. Teases Law: “The two of them may have more in common than Nyssa originally thought.”

Question: Obsessed with Jane the Virgin. Any scoop on this season’s final episodes? —Caroline
Ausiello: Mean Girl alert! Season 1’s penultimate episode will mark the introduction of Jane’s beyotch of a high school nemesis Stephanie, and sources confirm to me exclusively that Mariah Buzolin of All My Children and (ha!) Jane by Design fame has snagged the role.

Question: Any scoop on Bates Motel? — Katie H.
Ausiello: Norma and Norman will boldly go where no Bates family member has gone before: into their very own bathroom! “We’re so excited to have a bathroom,” declares exec producer Kerry Ehrin of the show’s newest set piece, which debuts in next Monday’s episode. “We always wanted to do scenes with Norma in the bathtub and Norman walks in and they’re just chatting, and we never had a bathroom so we couldn’t do it.” Ehrin adds that the new loo boasts “his and her sinks” giving the space an appropriately creepy “husband and wife vibe.” No word on the shower functionality. (Psycho humor!)