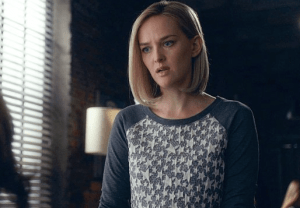 Is R. Kelly’s most ridiculous hit destined to play on an upcoming installment of The Good Wife?

Because from the way showrunner Robert King tells it, Florrick-Agos-Lockhart’s plucky (and currently MIA) investigator Robyn Burdine is trapped in the closet of the CBS drama’s tumultuous law firm.

“They never let her out,” King said with a chuckle at last weekend’s PaleyFest, after TVLine asked him to explain the fan favorite’s absence since the second episode of The Good Wife‘s current season. But fret not: She’s still employed as an investigator at the firm — despite the fact that the hiring of Archie Panjabi’s Kalinda might’ve made her redundant.

“The secret obviously is that Jess Weixler is in L.A. and going out on auditions,” explained King. “We didn’t want to lose her or kill her off because we love the actress so much.”

While King’s admission that Weixler is seeking new acting opportunities is a pretty sure sign that the show does not plan to promote her to series-regular status in Season 7 — after Panjabi’s P.I. makes her planned exit — he sounded optimistic that viewers haven’t seen the last of her, either.

“Whenever or if Robyn can come out of that office she’s in that we never see, just like those decks on Star Trek that you never see, she’ll be right back in the thick of things,” he said. “We’re big fans. It all comes down to what Mark Saks, our casting director, can get/make happen.”

Relieved to hear Robyn didn’t get axed? Anxious to see her back in the mix with Diane, Cary and Alicia? Sound off in the comments!

(With additional reporting by Vlada Gelman)