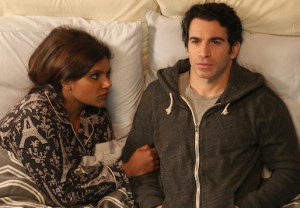 The Mindy Project‘s Mindy and Danny have never done things in the usual rom-com order: Why start now?

This week’s episode of the Fox comedy ended with a bombshell — that Mindy has a little Castellano in her oven — and left Dr. L likely wondering how to proceed in telling her super-Catholic boyfriend that they’re about to be parents.

Star and series creator Mindy Kaling tells TVLine that the development, which we now can reveal was the subject of TVLine’s recent blind item, was years in the making.

“We talked about accidental pregnancy since the beginning of Season 1,” she says. “Nothing is funnier to me than an OB-GYN impregnating another OB-GYN accidentally. They, of all people, should know better.”

Though Kaling and her writers’ room may have seen the pregnancy coming, that wasn’t the case for a gobsmacked Dr. Lahiri (despite an admitted inability to take her birth control pills regularly). 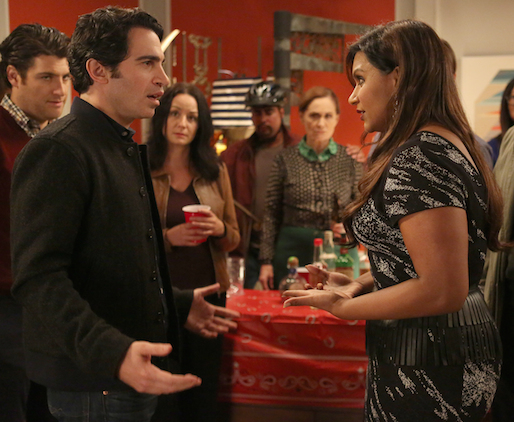 “Mindy thinks of herself as impossibly young, and that she has many years left before she needs to seriously think about kids,” Kaling says. “We have been writing her as particularly job-focused, so this is definitely a surprise.”

The half-hour ended with Mindy keeping her secret to herself — but that won’t last long, Kaling previews.

“The next episode is all about Mindy trying to tell Danny,” she says, praising an installment which brings Danny’s father and half-sister to New York and winds up with his mother Annette hosting everyone for a meal. “It’s one of the best episodes of the series, ‘Dinner at the Castellanos.'”

RELATED Mindy Kaling on Mindy Project‘s Pivotal Pair: ”I Love You’ Is Not Their Issue’

The couple’s trajectory hasn’t followed a smooth or typical path since they first locked lips in an airplane galley last season. As such, Kaling says, conceiving a child before moving in together or getting married “seems correct for them, though definitely not the way they would have liked it.”

Both NBC Universal, which produces Mindy, and Fox were “very supportive” of the narrative turn, she adds. “They were really enjoying seeing Danny and Mindy date, but I assure them their dynamic would not change. [A baby] just complicates their relationship even more and opens up so many new avenues of comedy.”

Future episodes will address Mindy and Danny’s plans for the future; a recently released synopsis for the Feb. 17 installment has the docs planning a move out of New York City, though Kaling plays coy with what’s ahead for the pair.

“All I can say is that we are purposefully trying to mess with the order of how things are done ‘traditionally,'” she says, “and that’s a big part of the last bunch of episodes.”