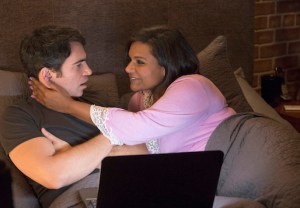 If you’re a Mindy Project fan eagerly awaiting the very special episode in which Danny and Mindy say those three little words to each other… where have you been, ya perv?

“If you noticed from last season, Danny kind of said ‘I love you’ in the finale,” Kaling tells TVLine during a recent visit to the Fox comedy’s set. “And then Mindy threw an ‘I love you’ to Danny in Episode 2 [of Season 3] in a cold open that was about something completely different.”

Kaling says the casual tossing-around of such serious sentiment is meant to prove that, despite Mindy’s affection for rom-coms, the doctors’ romance won’t follow the traditional formula.

“Everyone was like, ‘What going to be the fun when they’re together?,’ and it never occurred to me or my staff that would be a challenge,” Kaling says. “What we want to try to subvert is, shows always do ‘when they say I love you,’ ‘when they have them moving in.'”

She adds: “We don’t want to use the same tentpoles as every other show [does] about our relationship.” 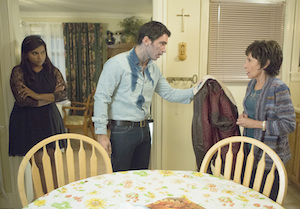 “It’s sort of a cocky thing that we’re like, ‘Yeah, ‘I love you’ is not their issue,” Kaling says. “Other things are harder. [Similarly,] their moving in together, as far as I can tell, is not going to be a big episode.”

But that doesn’t mean that Beyonce Pad Thai and Diamond Dan will skate through their shared life with no problems.

“They’ll have other stuff that we haven’t seen before,” she promises. “But I’d like to avoid those clichés, if possible.” — With reporting by Scott Huver