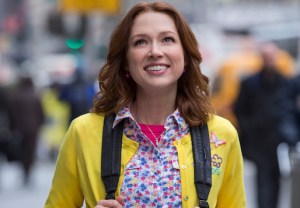 If ever there were a poster child for living in oblivion, Ellie Kemper’s title character from Netflix’s Unbreakable Kimmy Schmidt is it.

All episodes of Kimmy — co-created by 30 Rock‘s Tina Fey and Robert Carlock — are now available on the streaming video service. In a moment, we’ll want to know what you thought of the premiere episode. But first, a brief recap:

Much like Fox’s Last Man on Earth, Kimmy Schmidt mines terrible conditions for great comedy: Kemper’s Kimmy is one of four “Mole Women,” ladies kept in an underground bunker in Indiana for 15 years by a crazy misogynist named Rev. Richard. Thinking that the world outside is a fiery wasteland, Kimmy and her “sisters” are shocked when a law-enforcement task force breaks down the door and rescues them.

“It’s here! It’s all still here!” Kimmy says, looking around in wonder at the world. And that sense of awe stays with her throughout the episode, as she and the other Mole Women travel to New York to be interviewed by Today‘s Matt Lauer. When the morning host asks what’s next for the survivors, Kimmy realizes she can do anything she wants: So she chooses to stay in Manhattan and live off her portion of a fund set up for the Mole Women’s futures.

Watching Kemper channel Kimmy as she experiences the most mundane aspects of city life is a joy; she frees a carriage horse in Central Park, she sighs “Whee!” while riding on a subway car. And even when answers an apartment listing and is told she needs a job before she can move in, Kimmy just shrugs and makes it happen — turning a scolding of a bratty rich kid into a job as his new nanny. (As the boy’s mother, Jane Krakowski is the rich woman of leisure Jenna Maroney might’ve dreamed she’d eventually become.)

Armed with a J-O-B and her Mole cash, Kimmy secures a place to live (aka the walk-in closet in an apartment occupied by a flamboyant and angry gay man named Titus). Kimmy sees none of the basement flat’s downsides — her “room” has a window, after all! — and takes her new pal Titus out on the town to celebrate.

Problem: While they’re at a club, someone steals Kimmy’s backpack… and the remnants of her Mole money. And she’s so tired from the ordeal that she sleeps through her first day as Buckley’s nanny, which gets her fired. Titus, a fellow small town transplant, suggests that she return home before the city turns her into the pathetic failure it’s made him; once a Broadway hopeful, he’s been reduced to wearing a robot costume and shilling for an arcade in Times Square.

But catching a glimpse of a rat in a garbage can at the bus station makes Kimmy remember seeing one of the rodents in her bunker… and using its existence to challenge Rev. Richard’s claim that all life outside had ceased to exist. So she pulls herself together, finds Titus in Times Square and exhorts him to band together with her in oddball solidarity.

“We’re different. We’re the strong ones, and you can’t break us,” she cries, and her sunny nature wins over even the cynical man-sized robot, who breaks into The Circle of Life from The Lion King (with Kimmy on back-up vocals) as the episode ends.

Oh Kimmy, you had us the moment you called Matt Lauer “Bryant.” We’re in. We’re all in.

What did you think of the premiere? Grade the episode via the poll below, then hit the comments to elaborate on your choice.