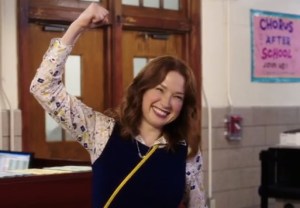 Kimmy Schmidt discovers that she likes dancing with her butt, loves eating candy for dinner and hates Velcro, in the full trailer for Ellie Kemper’s new Netflix comedy.

Created by 30 Rock‘s Tina Fey and Robert Carlock and releasing 13 episodes on March 6, Unbreakable Kimmy Schmidt stars The Office‘s Kemper as a survivor of a doomsday cult, fished out of an underground bunker after 15 years of isolation.

Relocating to New York City — a world quite different from the Indiana hole she’d been living in — she rooms with Times Square robot Titus (played by 30 Rock‘s Tituss Burgess) and finds work as a nanny (to 30 Rock alum Jane Krakowski).

Originally developed for NBC, Kimmy Schmidt already has been renewed by Netflix for Season 2. Watch the trailer and tell us if you’ll be watching.