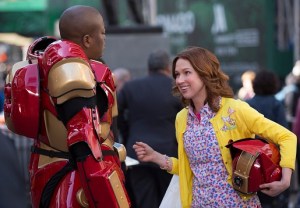 With Tina Fey behind the camera and Jane Krakowski in front of it, you might mistake Netflix’s Unbreakable Kimmy Schmidt for just another 30 Rock.

And the show’s producers are totally OK with that.

The comedy stars Ellie Kemper (The Office) as a woman who starts a new life in New York City after being liberated from a doomsday cult. She lands a job working for a wealthy Manhattanite (Krakowski), who’s vapid, self-absorbed… a lot like Jenna Maroney, huh?

“People will naturally compare the two because of our connection through 30 Rock,” Krakowski said of the character. “But we’re taking every step and choice that we can to divide the two. [This character] has a greater sympathy than Jenna ever had.”

Fey and Carlock also spoke about the comedy’s move to Netflix, which happened immediately after it was cut by NBC. Fey’s opinion? Kimmy Schmidt may draw a bigger crowd on Netflix, anyway.

“Because the show is made by NBC, it’s in NBC’s best interest for the show to have its best home,” Fey said. “It makes more sense than broadcast. With Netflix, people are choosing to come to you. You can be a little darker and edgier.”

Does that mean we’ll hear Kemper drop an F-bomb at some point? “We’ll have to find that as we go,” Fey said.

At its core, though, Carlock said the show is about “people coping with what their issues are.” When it comes to Kemper’s titular character, Carlock drew comparisons to the beloved Mary Tyler Moore show. “There’s this wonderful combination of strength and openness that [Kemper] projects. We talked about different ways to communicate that.”

Are you excited to meet the Unbreakable Kimmy Schmidt? Hit the comments with your early thoughts!