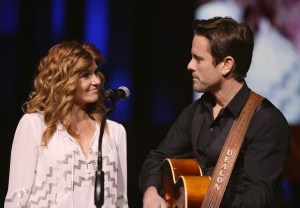 Remember how Friends‘ Phoebe Buffay never saw the end of sad movies as a child, because her mother didn’t want to bum her out? Maybe Mama Buffay was onto something.

Think about it: Scrubbed of its final few minutes, this week’s Nashville is a happy affair. There’s singing, there are meaningful gazes, there’s good music and there are digs made at Jeff Fordham’s expense.

Throw in a singing candelabra, and it’s practically a Disney movie.

But then there’s that last scene, with the confessing, and the slapping, and the crying, and the desperate hugging… and wouldn’t we all be much happier if the hour had closed on Deacon and Rayna taking their bows at the Grand Ole Opry?

Alas, series creator Callie Khouri — who wrote and directed the episode — likes it when we ache. So let’s all hold hands and review what happens in “That’s the Way Love Goes.”

A FAMILY AFFAIR | The hour centers on the 10th anniversary of Rayna’s Grand Ole Opry induction, a milestone marked with a celebratory concert. She asks her daughters to perform with her, which is very sweet. Maddie uses the opening to wonder why her mom hasn’t reunited romantically with Deacon. “I’m not sure what that looks like yet,” Rayna sadly tells her. (Psst: Maybe this’ll jog your memory, Ray?)

Rayna eventually calls Deacon and asks him to join them on stage at the Opry. “I just can’t imagine having that night without you being there,” she says, and it works: He and his guitar show up, just in time to stick in the craw of Luke, who’s there at Colt’s request. (Side note: Remember when Colt was an annoying little wannabe DJ? Thank goodness that phase passed quickly.)

HERE COMES THE DOOM | The First Lady of Country Music gets a little choked up as she introduces her kids, who sing “Heart on Fire” with Deke backing them up. Then later, as Rayna’s saying some very nice things about Deacon, he surprises her on stage and they sing “The Rivers Between Us,” which is quite a beautiful duet. They’re looking meaningfully into each other’s eyes, and a cutaway shot tells us that the lone, soulful black woman in the audience is FEELING it. They even embrace after the tune is done, but Deacon beats it outta there without saying goodbye, which puts a weird postscript on the evening.

So Rayna tracks Deacon to their/his river house, and is pretty straightforward (especially for these two) with her needs. “Babe, please don’t leave me anymore,” she pleads. “Rayna, I’m sick,” he replies. “All those times you said my drinking was gonna kill me? You were right.” Rayna slaps him (!) then looks like she’s going to vomit from crying so hard so fast, then falls into his arms as he apologizes. Me? I’m still processing the fact that she called him “Babe.”

‘TWO GUYS AND THEIR CRAZY-ASS EX-GIRLFRIEND’ | One person who’ll likely be happy to hear about Deacon’s confession is Scarlett, who’s so consumed with thoughts of his illness that she can’t talk about anything else during her first date with Hot Doctor Caleb. C’mon, Scar. Can’t you pull another conversation topic out of that giant cloud of hair settled on your noggin? Their evening together is a total dud, but she owns it and invites him to see her, Avery and Gunnar open for the opener for Rascal Flatts.

About that gig: Gunnar takes it way more seriously than either Avery or Scarlett do. To wit, he spends most of the episode trying to brainstorm a better name than SAG Band. Some contenders: Scar Gunnery, Liquid Sister, The Backroads, Fried Green Tomatoes, Whiskey Frogs, Highway Cheese and the Leather Guitars. (I could seriously get behind some Highway Cheese and the inevitable product tie-ins. Just my two cents.) When Caleb shows up and asks if the guys are Scarlett’s exes, he sparks an idea: The Triple XXXs are born!

The band is such a hit that Rascal Flatts wants them to tour six dates; anyone else shocked that I-had-PTSD-remember-the-time-I-hid-under-a-piano Scarlett is the first one to joyfully agree to the arrangement? Caleb seizes the moment and kisses her, and don’t think that Gunnar doesn’t notice.

RELATED Grey’s Anatomy Preview: How Are Jackson and April Weathering Their Loss?

AROUND TOWN | Elsewhere, Will “proves” he’s not gay to an out gay songwriter by being a giant jerk to him. But they eventually get along. Question is: Will they eventually get along…? During an interview on Good Morning America, Sadie tells Robin Roberts that Pete abused her… With Jeff pulling the strings, Layla subverts Bucky’s Highway 65 rollout plan and releases her single on her own. It’s a ballsy move, but it pays off. Also: She and Jeff sleep together again, but she tells him not to meet her at an afterparty, because they shouldn’t be seen together… Juliette’s late-pregnancy insomnia keeps her in bed (read: off screen) for the entire episode… Oh, and Ol’ Leopard Panties shows up at the Opry to tell Teddy that she’s under law-enforcement surveillance, and after his visit the other night, there’s no way he’s not going down with her.