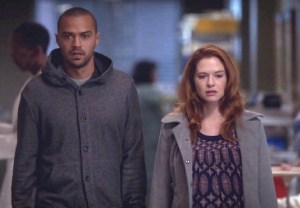 When last we saw Grey’s Anatomy‘s April, she and husband Jackson had held, and said a tearful goodbye to, their son Samuel, who tragically was born with a severe, fatal case of osteogenesis imperfecta.

April has been off screen for the two weeks since that episode — portrayer Sarah Drew went into real-life labor just 10 hours after filming her character’s own childbirth — while Jackson (played by Jesse Williams) has been private with colleagues about how he and his wife have been coping. But in this Thursday’s otherwise Amelia-centric episode (ABC, 8/7c), April resurfaces, allowing some first insight into the quickly tested nascent marriage.

Having had some time to process her experiencing of every parent’s nightmare, “I think she has some sense of peace,” Drew tells TVLine. “I think she believes that God is with her, and that is giving her peace that sort of goes beyond what she could have imagined.” That said, April is also “in excruciating pain,” the actress adds. “It’s this strange both/and situation, which is what I love. We’re telling a story of finding peace and hope in the midst of pain and tragedy.”

Even so, viewers should plan to lay witness to a changed April, as she adopts a new, uniquely enlightened point of view on life, its preciousness and the decisions we make.

“Moving forward, we see a grittier side of her. She doesn’t care about things that don’t matter anymore,” Drew previews. “She’s been to Hell and back, and she has a scene in a later episode with a patient who does something inane to himself, and she has no patience for him, no compassion. So we’ll see that side of her come out, which will be alarming to the people that know her.”

Yet even as Jackson himself is taken aback by his wife’s aforementioned personality shift, Drew believes that April’s marriage will emerge “strengthened” in the end, beyond what any other crucible could have done.

“I love that they are one unit together through this whole thing,” she shares. “Now, they just need to cling onto each other for dear life, and heal together.”