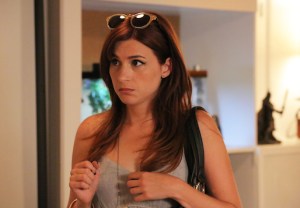 Let it be known: When You’re the Worst star Aya Cash found out her Sirens guest gig involved working with a giant python, she was more than prepared to get close-up with her scaly co-star.

Then series co-creator Bob Fisher informed her, “‘Aya, there’s no python,'” she recalls, laughing. “I was ready to go full Britney Spears with it and think I was a badass.”

Cash’s appearance on the USA Network comedy (Tuesday, 10/9c) gave TVLine an opportunity to chat with about the finer points of wrangling foam reptiles (more on that in a moment) and to get an early preview of her wickedly funny (now) FXX series’ upcoming second season. Read on for more.

TVLINE | Were you familiar with Sirens before you went out for the part?
I actually had seen the show. Bob Fisher, who is one of the creators of the show with Denis Leary, created a show called Traffic Light that I was in in 2011. So of course I wanted to watch and support him. Also, [Sirens star] Kevin Bigley and I had done a failed pilot together, and [Sirens star] Kevin Daniels knew my husband. I knew [Sirens star] Mike Mosley’s work from New York theater. There were a lot of connections there already. And I was already a fan.

TVLINE | Your character is named Cindy. I can’t tell if she’s nutty in general, or if she does a nutty thing in the heat of the moment.
I think Cindy’s probably pretty nutty already. I think any person scorned can behave badly. I know I have. But I think that she goes to the extreme, and I think you have to have a predilection for that in the first place. 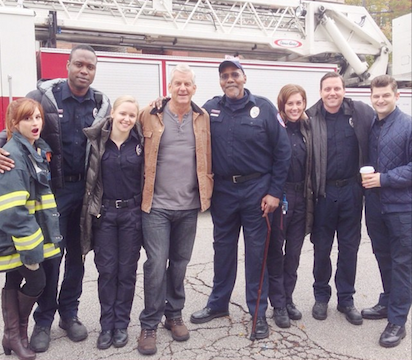 TVLINE | She steals her ex-boyfriend’s giant python. Can you take me from her stealing it to how she gets involved in needing the guys’ help?
You see her already in peril. She’s stolen this python to get back at her ex-boyfriend who’s rejected her, and it gets out, and she ends up in a compromising situation with it. The boys stumble upon her mid-disaster. [Laughs]

TVLINE | Tell me about the snake.
It was foam. It was challenging because it’s very light foam, and if you move too much, it looks fake. But I think we got it to a good place. And it’s a beautiful [prop], a really incredible, intricate piece. But you have to be very still with it, or else it sort of flops around. It was a challenge in itself to stay still with it.

TVLINE | But you were game for working with a real snake?
Yeah… I don’t have a huge issue with snakes. Spiders, I would probably freak out. Snakes, I’m cool with.

RELATED You’re the Worst Renewed for Season 2, Moving to FXX

TVLINE | You’re the Worst — Did you think when you first started shooting that it would be such a huge hit with critics?
I am a pessimist by nature, and this is one of the first things I’ve ever done that I’ve thought, “People have to like it,” because I like it so much. I believed in it so much from the beginning, and I think it grew further in my expectations. We were all so in love with each other, the cast, the crew on our set is amazing, the writers. It was sort of like, “This has to work.” But that doesn’t mean that it will… It was just such a lovely gift to all of us to say, “No, what you guys have loved so much is really working.” The [critics] helped us get a Season 2. Because as you know, it’s no secret, the numbers were not huge. Critical acclaim coming out really helped the show and show that people really believed in it. So I’m eternally grateful.

TVLINE | You’re the Worst ended Season 1 with Gretchen and Jimmy moving in together. Executive producer Stephen Falk told us that they’re not going to settle in easy in Season 2. Have you started shooting yet? What can you tell me?
We haven’t started. It’s unclear exactly when, but within the next two months we’ll start. I know they’ve written, God, they must’ve written probably eight by now. So they write the entire season beforehand but they’re incredibly tight-lipped about it. Stephen has all of the writers on lockdown. I went to drinks with a couple of the writers when I was in LA last and was like Give me the scoop! And they were like, “Stephen will kill us.” [Laughs] So really, they’re keeping it a secret from us as well. Stephen has laid out, just from the pilot even, what was going to happen, the big event of each year, Season 1, Season 2, Season 3 in terms of the tracking of the relationship, but we don’t know how we get there at all.

TVLINE | How far has he tracked?
I think he pitched a tentative three seasons. Obviously it’s going to change a lot… He has an idea of how he wants to track their relationship. Again, it’s not a will-they-or-won’t-they comedy. So they will, but how is of the exploration. It’s not a spoiler to say they’re going to hit a lot of relationship milestones together and probably screw them all up. But they do hit those relationship milestones. 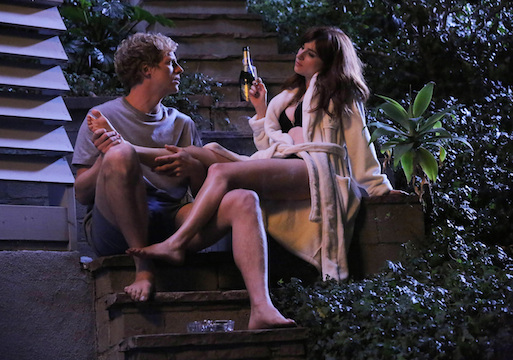 TVLINE | There are a bunch of scenes in the first season where you struck me as fearless, such as when you were lying naked on a driveway.
[Laughs]

TVLINE | Was there anything that gave you pause when you saw it in the script?
I’m not, like, a naked person, which is surprising, because I have to do some stuff for the show. But in my real life… I go to the Korean spa sometimes and I feel empowered and terrified, walking around naked with the women in their bras beating me up. It’s a very scary thing for me, but again, it’s just like I knew this was really good. I really trust Stephen, and none of it felt gratuitous. A lot of the sex and nudity is in the name of comedy. I don’t think the sex is joke-joke-joke, but it’s funny and awkward and weird. And I just believe in all of that. It’s terrifying. I wish I was one of those people. I grew up around dancers and people like that. I’ve never been that way. [Laughs]