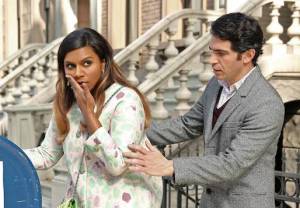 William Shakespeare wrote, “If music be the food of love, play on.”

Danny Castellano groused, “I’ve got a baby in there, and he’s cookin’, and he needs some healthy chicken.”

This week’s Mindy Project finds mom-to-be Mindy doing what some pregnant women wait all their lives to do: eat with abandon in a socially approved fashion. However, once love-of-her-life Danny is appointed her personal nutritionist, life gets a lot less sweet. Read on as we review “Danny Castellano Is My Nutritionist.”

WATCH OUT! | Mindy’s morning sickness is causing her to throw up everywhere: the drawer of Danny’s bedside table, a public mailbox, Danny’s Little League trophy. The “constant ralphing” is gross, but Dr. L sees it as an encouraging sign, and he recites some common knowledge about Castellanospawn: “First they make you puke, then they wreak havoc on your birth canal.” Ouch. To help contain Mindy’s frequent overflows, Morgan gives her a pink, bedazzled barf bucket. Aww, that’s cute and icky.

YUM YUM GIMME SOME | Danny is convinced that the morning sickness is triggered by Mindy’s terrible (read: candy-heavy) diet. And he’s backed up by Peter — who’s their OB-GYN… via Skype? Ok… — so Danny makes her oatmeal and steamed chicken and harps on her to eat better for the baby’s sake. This, of course, causes Mindy to literally nose-dive into Tamra’s huge birthday cake. And when Danny catches her with icing all over her face, he tells his beloved she has no willpower whatsoever, and he does it in that way that makes you want to strangle him.

So later, when she happens to glance out the window, Mindy’s shocked to see Danny chain smoking. They strike a deal: She’ll eat better if he ditches the butts for good. 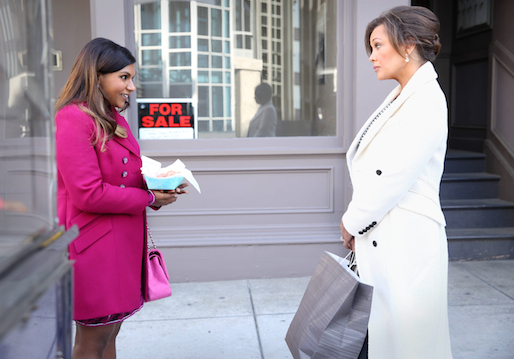 SAVING THE BEST FOR… NEVER | Meanwhile, Shulman and Associates needs to hire a new doc, and when Mindy runs into her med school professor Dr. Phillips — played by Vanessa Williams — and learns she’s retired, Mindy makes recruiting Dr. P her main mission. But when the posh doc realizes that working at the practice means saying goodbye to any semblance of a life, she’s out.

And though Mindy gets into a snit when another potential replacement, Dr. Bergdahl, doesn’t know who Shonda Rhimes is, he eventually diagnoses her with stress-triggered morning sickness… and not the diet-triggered version Danny claimed. (She has a mini-breakdown and pukes on him in the process. Thanks for the visual, Mindy Project.) Later, Bergdahl cautions Danny that life with an infant will be very stressful, and it’s likely he’ll go back to smoking to cope — won’t he want Mindy to cut him a little slack? Dr. C is so impressed with Bergdahl’s diagnosis and empathy, he hires him as Shulman and Associates’ newest physician.

MOMMY AND DADDY MAKE UP | So a chastened and sympathetic Danny admits to Mindy that he’s hard on her because he doesn’t really know what he’s doing when it comes to fatherhood. And she admits to him that she’s worried smoking will take him away from her (and the kiddo) too soon. So they kiss, and all is well, and Mindy only throws up one more time before they get it on.