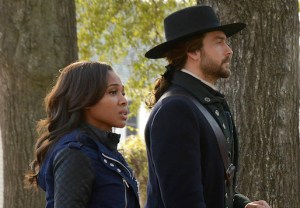 He’s got grounds: Mrs. Crane repeatedly tried to kill her husband and his fellow Witness in last week’s episode, and then sucked Abbie back into the 18th century with her.

After that, Mison says, Crane is done asking politely.

“I didn’t want Ichabod to plead with [Katrina],” he says. “I think there’s been so much of that. I got really bored of seeing a weak Ichabod.”

We chatted with the actor about the season-ender, which includes a lot of ye-olde-school Ichabod (“He’s got responsibility, and there are lives at stake”), recent callbacks to the series premiere (which gave him “a shivery excitement”) and — when he brought it up — the Witnesses’ undeniable connection (“They belong together”).

Read on for all the details.

RELATED Where Is Sleepy Hollow‘s Kindred? Star Tom Mison Has a Marvel-ous Theory

TVLINE | In Monday’s episode, it seemed like you played Ichabod more angry than hurt when Katrina sided with Henry. Talk to me about that choice.
This is actually something that I had long conversations with [M.] Raven [Metzner], the writer, about — about how to react to it. Because more than anything, it’s a shock. Any sadness, that will come… I think it would be a really nice twist, along with Katrina having a big twist, suddenly we see a shift in gear from Ichabod and he realizes that his family is broken and he has to fight against them. 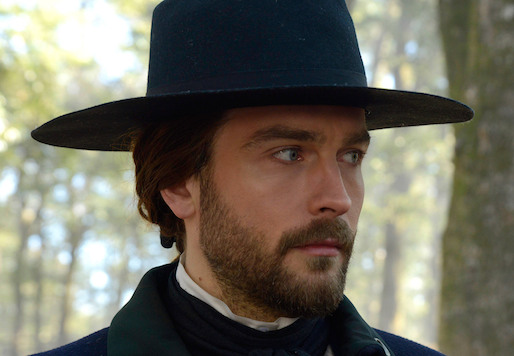 TVLINE | Going into the finale, then, is he thinking that their marriage is done. Is he done with her?
There’s a slight sense of questioning what she’ll be like without Henry’s influence.

RELATED Sleepy Hollow Recap: Can’t Unring That Bell — Plus: Find Out Who Died!

TVLINE | The last episode had several callbacks to the series premiere, with Abbie in the road at the end and the string cover of “Sympathy for the Devil.”
Oh man. I hadn’t heard that version of “Sympathy for the Devil.” Raven told me it’s what they were planning, some of it shot-for-shot mirroring the pilot. I got very excited when he told me that. I just watched it. I got the kind of shivery excitement that I used to get at the beginning of the first season, which was such a nice relief to feel that, to just laugh and say “This is so cool” again. I think that’s what a lot of viewers have been waiting for.

TVLINE | Ichabod prides himself on being a man of logic. So when he sees Abbie in the cell and she’s telling him all of these very illogical things, how does he handle that?
He’s got a war to fight. And suddenly this woman — I mean, who knows how many other runaways have tried to appeal to him by throwing absolute nonsense at him? Apart from her terrible clothes, she’s no different. There’s nothing about her that’s worth listening to; it’s just the ramblings of a mad person. And he’s called away in the middle of a battle to talk to her. He knows that there’s another attack coming. He’s very busy.

It’s nice to see 18th-century Ichabod for longer than a five-minute flashback. It’s nice to have a full episode of a completely different Ichabod, where he’s got responsibility and there are lives at stake. I think you also get a greater understanding of why he’s as anal as he is in the modern day, because he’s so used to being — well on the one hand, if you’re going to be favorable to Ichabod, you can say he’s so used to being a decision-maker, having to think on the spot and to use logic. If you’re going to be negative about Ichabod, you can say he’s so used to people obeying him without questioning him. [Laughs] It’s great to finally see that Ichabod and be able to explore the man of responsibility being gradually, gradually charmed by Abbie. If not charmed, persuaded by Abbie… Paul Edwards, who directed the finale, we discussed a lot about how we could find just a little bit of the magic chemistry in the 18th century so that, no matter where they are or what time they are in, there’s something that draws them to each other. Do you know what I mean?

TVLINE | I do. It goes along with the fact that there have been a lot of lines in the past few episodes reaffirming the Witnesses’ connection and why the way the two of them relate to each other is special.
Yeah, lots. [Laughs]

TVLINE | You can almost see the subtitles underneath: “Stay with us, fans. We’ve got this.”
[Laughs harder] Yeah, exactly. They belong together, whether it’s the 18th century or the 21st century or whatever century. Whether it’s in America or England. Wherever they were destined to meet, they will be together and they will be drawn to each other.

TVLINE | You know, when you say things like that, what people read into it.
Am I ‘shipping?

TVLINE | You are ‘shipping hard.
I have said nothing about romance. Ichabod’s britches are firmly on when I say that. [Laughs] Just because I said they’re drawn together doesn’t mean they’re going to roll around in 18th-century hay together.