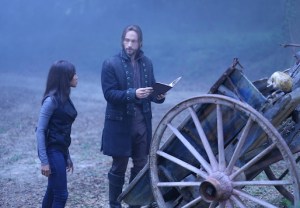 Put aside for a moment the fact that Sleepy Hollow‘s Katrina has gone to the dark side. Disregard that Henry is worm food. Don’t think too much about the tumble through time Abbie and Mrs. Crane took at the end of this week’s episode.

We’re going to need you to train all of your mental focus on the fact that The Kindred — the evil-fighting avatar that Ichabod and Abbie constructed (and promptly lost) at the beginning of this season — is still out there, roaming Westchester County like a roadtripper with a busted GPS.

If you’re wondering just where that behemoth is hiding, you’re in good company: Series star Tom Mison tells TVLine he’s puzzled, too. But he’s got an Avengers-inspired theory — as well as some thoughts on the upcoming season finale (Fox, Monday at 9/8c) — which he was happy to share. 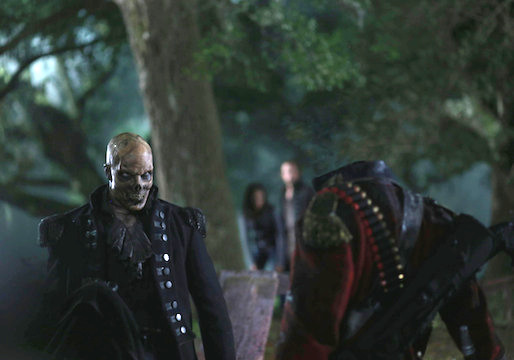 TVLINE | What’s the possibility we’ll see it again?
I have been begging, begging for months to just have a shot — just one thing, apropos of nothing — mirroring the end-of-credits sequence in The Avengers, with The Kindred sitting, having a shawarma, just waiting, a little bit lost, on his own. Perhaps with The Sandman. [Laughs]

TVLINE | And how is that going?
Small steps, Kim. Small steps. This is a long race.

TVLINE | You’ve mentioned that there’s a level of finality in the season finale that you wouldn’t expect from this show. Could the episode serve as a series finale, if that comes to pass?
No. I think it does open the door. It opens a big door for a new team; new relationships within the team are forged in that final episode that open a door to such great opportunities for Season 3. If [a renewal] doesn’t happen, there would be a few questions answered, but there would be questions raised about what would happen now.