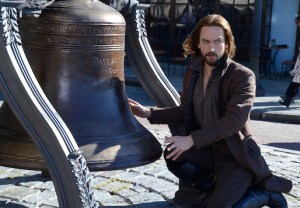 Sleepyheads, circle the wagons, because we’ve got a lot to talk about.

This week’s Sleepy Hollow not only killed off Henry and sent Abbie skipping through time like a smooth stone, it officially turned Katrina into the Witnesses’ adversary.

This is a big, witchy deal. And, if you’re like me, you have thoughts.

Let’s take a look at what happens in “Awakening.”

HELL’S BELLS | Ichabod and Abbie open the episode in a bookstore, where a nice clerk is trying to help them locate some titles they destroyed when they blew up the fenestella last week. The clerk makes Ichabod a cup of tea, he smiles at her, so therefore — given his history — SHE WILL DIE. (Though she doesn’t in this episode. Also, anyone else notice the shout-out to supervising producer Doug Aarniokoski in the window?)

Ab laments that they didn’t really think through the plan grab any of the books Jefferson hoarded before destroying the Witness Cave, but Ichabod says they need to “define the rules as we see fit.” They also talk about living by a code of conduct. “To be effective, we must put our bond as Witnesses before anyone or anything else,” she says, and he wholeheartedly agrees.

Just then, a very old bell mounted in the town square starts clanging, and it causes some people nearby to go all milky-eyed and do strange things: choke someone with their mind, electrocute someone, speak with the voice of the dead, etc. Is it any coincidence that Henry’s nearby, chanting from the grimoire Irving stole from Solomon Kent?

When Ichabod and Abbie figure out that the bell — which is akin to the Liberty Bell, which Ich cracked on George Washington’s orders — is somehow turning people witchy, Mills suggests they talk to Katrina… but Crane demurs. She’s been “distant” since the Kent case, he says.

FAMILY REUNION | What’s Special K been up to? Oh, you know, dabbling in blood magic to summon Henry to her side. He shows up (looking rather snazzy) and spins a happy, if twisted, future for the two of them: Using the grimoire, they can do an awakening spell and really ring that bell, thus activating all of the descendants of witches who happen to be in the area. It’ll be like the Coven of the Sacred Heart on steroids, and Mama Crane and her baby boy will be at the head of it. “I can’t do this without you, Mother,” Henry says, and by the smile on Katrina’s face, you know she’s all in.

HENRY’S LAST HURRAH | Crane and Mills somehow (no seriously, how did they do that?) get the bell out of the square and adjacent to the tunnels, where they’re planning to damage it the way Ich did the Liberty Bell. But Bad Irving shows up and starts shooting at them, so Jenny pursues him.

That leaves the Witnesses to realize that Katrina and Henry, who’ve also shown up, are working together now. Ich warns his wife that the whole thing is a trap, but she’s pretty much done being Mrs. Crane — which she makes clear by using magic to blast Ich and Ab back into the tunnel, which Henry quickly re-seals, brick by brick.

So the Witnesses come up with a plan to destroy the bell, but they’re thwarted and lashed to a post while Katrina and Henry make the final preparations. Little do the evil twosome know, Ab was able to place a charge on the bell before she was caught. And Ich is packing heat under his coat. So he passes a gun to Abbie and then stuff. goes. down.

Ichabod aims at the bell, but Henry stops the bullet before it hits its mark. Abbie aims at Henry, and nothing stops her bullet: Yep, Henry dies. Just before the Warlock Formerly Known as Jeremy dissolves into dust, he looks up to see Katrina and Ichabod kneeling by him. “My family,” he whispers… and then he’s gone. Ichabod counsels his wife that the blame isn’t hers. “No, it’s yours,” she growls.

THE WRATH OF THE WITCH | But wait, she’s not done. As this is the first time we’ve really seen Katrina do much of anything this season, I feel it’s important to give you the full picture. Commence redheaded rant! “You are the source of my sorrow, Ichabod Crane. You are the reason I was not there to save my son. I never should have saved your life when the horseman put you down. I never should have put you to sleep. I should have let you die. And this time, I will.”(Now that is someone I could have rallied against earlier this season! Where’ve you been, girl?)

Then Katrina does a huge, swirling spell, and disappears — but not before Abbie, who takes a running tackle at her, gets sucked in with her. Oops.

THE REAL IRVING RETURNS? | Let’s take a moment to catch up with Jenny and Irving. She lures him to the cell where they held the Headless Horseman, and she’s ready to show him the gorgon’s head (thus turning him to stone and buying them some time to figure out how to restore his humanity). But when Henry dies, Frank pukes up the Smoke Monster from Lost and then seems to be back to himself. Jenny doesn’t take much convincing before she’s hugging him close. Wise move? Let’s hope we find out next week.

THE TABLES HATH TURNED | Abbie wakes up in the woods and, in short fashion, realizes that she’s landed in 1781 Sleepy Hollow. (Side note: Nice parallel to the pilot, there, with the sequence of Abbie in the road and the instrumental version of “Sympathy for the Devil.”)

Katrina, too, is back in ye olden days. She comes to in a field hospital, where she’s a nurse. It seems like she’s going to try to start over with Jeremy, as she pats her abdomen and says, “I will never leave you ever again.”

When Abs goes into the town square, she draws the attention of everyone. Naturally, she’s hauled into jail, where colonial soldiers demand to see her papers. “There’s only one person I’ll talk to,” she says. “Captain Ichabod Crane.”

MY TWO CENTS | This episode gives many of us what we wanted — Katrina with a purpose! A solidifying of the Witnesses as a team! — but I wouldn’t have minded seeing it happen at the midseason finale instead of one episode away from the season-ender. I can get behind Mrs. Crane as a baddie (in fact, I’d been hoping for that since she came back), but I wish we’d seen it threaded through the season a bit more than in the past two eps.

Still, I adored the amount of time Ichabod and Abbie spent teasing each other and talking about how much they value each other — “One thing’s for sure: I’m glad I’m not in this alone” — and I’m glad that the Cranes’ marriage is (seemingly) kaput. Because when it comes down to it, I adore Ichabod but never thought his mousy, weak, easily swayed wife lived up to the hype he built around her in Season 1.

Those are my thoughts. What say you? Sound off in the comments!