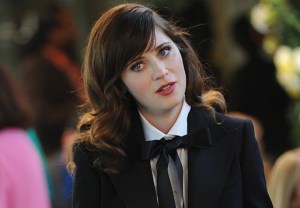 There was a period in New Girl star Zooey Deschanel‘s adolescence, the actress says, when she bore a striking resemblance to My So-Called Life‘s flannel-clad heartthrob.

RELATED New Girl‘s Zooey Deschanel Is Expecting — Will Jess Be, Too?

The episode (Fox, 9/8c) finds Jess and the gang traveling to Oregon for Bob and Ashley’s wedding — yep, that crazy pair is really going through with it.

The trip also provides a chance for the roomies to examine remnants from their pal’s past (including the aforementioned Jared Leto haircut, which shows up in a photo Deschanel provided for production).

“It turns out, Jess has a poster in her childhood room with a collage in it made of Jared Leto from My So-Called Life, and [production] put pictures of me from high school next to pictures of [Leto],” Deschanel tells TVLine. “I was like the female Jordan Catalano. I was like, ‘I guess I’m going to have to play his sister or something, close because it looks like we’re twins.'”

Click through the gallery below to see some exclusive photos from the episode, which brings back Jamie Lee Curtis and Rob Reiner as Jess’ folks and It’s Always Sunny in Philadelphia‘s Kaitlin Olson as Jess’ soon-to-be stepmom.