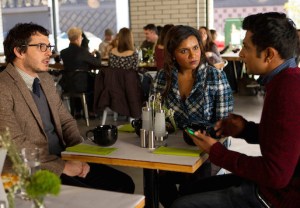 If you thought Mindy was the biggest flibbertigibbet in the Lahiri clan, may we re-introduce you to her younger brother, Rishi?

This week’s Mindy Project brings back Dr. L’s feckless sibling, who’s dealing drugs and making a mess of his life in San Francisco. But the super-frustrating Rishi helps Min come to an epiphany regarding her academic future, and that epiphany keeps her in New York, so we’ll give him a pass.

Read on for a review of “Lahiri Family Values.”

CALIFORNIA, HERE WE COME | The episode begins in the doctor’s lounge, moments after Mindy’s dropped the baby news on Danny. He wants to rush to City Hall and make her an honest woman pronto, but Mindy protests. Marriage, she says, “should be for love. Or, at minimum, for reality-show ratings.” (Ha.)

Danny reluctantly agrees, and they go back to his place. The next morning, it’s clear that the zygote in Mindy’s belly already completely owns its father. Danny presses his face to Mom’s abdomen and asserts that he knows the child is male. “I can hear his penis,” he claims. Charming.

But Mindy has to go back to San Francisco to start the practice with Rob, something Danny is shocked she still wants. She reminds him that women can have families and careers — “I mean, rich women,” she amends — and pretty soon, Danny is promising to move to California with her. She’s pleased, they exchange “I love yous,” and Mindy leaves to catch her plane.

DEADBEAT RISHI | Problem: When Mindy and Rob apply for a small business loan, they’re turned down because Mindy co-signed on an apartment that defaulted. She immediately marches to Rishi’s ‘Frisco pad — the door of which is covered with eviction notices — and simultaneously scolds him for being so irresponsible/reveals the fact that he’s going to be an uncle.

Dr. L has a solution to her bro’s money woes: He can use his biology degree and be a med tech at her new practice. Rishi nearly has the gig… until Rob realizes that the younger Lahiri is dealing drugs.

A furious Mindy drives Rishi to his boss, who goes by “Big Murder”… and he turns out to be a B-school nerd (played by Selfie‘s John Cho) with a thriving illicit pharmacy operation going on. Min realizes that Rishi deals not (only) for the cash, but for the affirmation that Big Murder doles out on the regular. Still, dealing drugs is not OK (thanks, The More You Know!), so Min forces Rishi to quit — and then reluctantly walks away, herself, when Big Murder offers her seven figures to write fake prescriptions.

ACTUALLY… | Everything ends well, except that as Mindy talks with Rob, she realizes that she misses the Island of Misfit Toys that is Shulman and Associates. So she bails on the California practice and drops out of her Stanford program, but soon realizes (with Neepa and Rishi’s help) that she can start her own practice in New York. And wouldn’t you know, Cliff happens to be moving out of his office space right then…

DADDY DID IT | The installment’s B-plot involves everyone at the practice thinking that Danny is dying when, in fact, he’s just planning to leave to live in California with Mindy. It’s the classic Morgan-incorrectly-deduces-something-and-then-everyone-believes-him-even-though-he’s-almost-never-right deal, but the interactions between Jeremy and Danny are pretty funny. Anyway, the entire staff is ticked when they realize that Danny and Mindy are planning to leave, so Dr. C blurts that he’s going to be a dad — even though he warned Mindy not to say anything until the second trimester — and everyone instantly starts cheering and hugging him. (Side note: The series is going to go all the way with this pregnancy, right? Though academically I think it would be interesting to see how Danny and Mindy would handle a blow like a miscarriage, no part of me wants to watch that actually play out.)

Now it’s your turn. What did you think of the episode? Favorite line? Sound off in the comments!