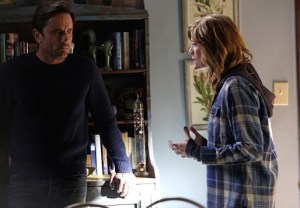 Hurricane Beverly blows into Nashville this week, and the damage she leaves in her wake is considerable, irrevocable and really, really annoying.

Even Gunnar at his Season 1-iest could not evoke as much of my ire as Scarlett’s mom does when she shows up and acts exactly as you’d expect of someone who once literally drove her daughter mad.

On the plus side, even Deacon’s irritating sister — and the setback in his illness in which she becomes involved — can’t push him into the pit of despair I feared he’d call home once his diagnosis set in. Nope, he (thankfully) seems determined to best his liver cancer. Deke, honey, you know what would help with that? A redheaded nurse with a voice like an angel and a vested interest in giving you thorough sponge baths. (In other words: Hurry up and tell Rayna!)

Read on as we recap what happens in “I’ve Got Reasons to Hate You.”

LIVER FAILURE | The moment Bev takes Scarlett up on her invitation and arrives at Deacon’s — a surprise to him — you just know things are going to get ugly. That woman is 10 lbs. of terrible in an 8-lb. bag. She thinks she’s there to mend the edges of their family relationship, which got pretty ragged during the whole Scarlett-in-the-mental-institution thing. And Deacon doesn’t want her to know about his illness, but that becomes moot when a seizure takes hold and causes him to (temporarily) lose the power of speech. Scary.

When we’ve established that he’s fine-ish, Scarlett makes the ask: She wants her mom to get tested to find out if she could potentially donate part of her liver to Deke. Beverly says no. BEV! You are the worst!

Scar eventually sweet-talks her into doing it — or maybe she just threatens to disappear her mother into the yards and yards of hair she’s sporting in this ep — and everything’s hunky-dory… until Bev gets a call from Hot Doctor (yeah, that’s his name) telling her she’s not a match.

But she really is a suitable match! Scarlett catches her mom in the lie, and things get really uncomfortable when Deacon overhears them arguing and tells Scarlett to chill. “You drank. You made the choice to destroy your body. And I just don’t think it’s fair that it’s up to me to save you,” Beverly spits at her brother, who takes it all very calmly. “You’re right,” he answers. “It isn’t.”

So Bev leaves, and Scar is sad, and Deacon tells his Alcoholics Anonymous meeting that he’s determined to fight because “I got a lot of people I care about, and they care about me.” Aww, Deke. I reiterate, Nashville writers: Deacon dies? FLAMETHROWER.

THE NEXT RAYNA JAYMES? | Let’s check in with some of those people Deacon cares about. Rayna spends the episode a little mopey (it’s ok, mama, you earned it) and has a small, Deacon-related freakout about playing an unannounced Bluebird show alongside Pam Tillis. She bails on that appearance but eventually plays a different Bluebird date, with Maddie and Daphne backing her up on a song Rayna and Maddie wrote. I’m not a huge fan of the song, “Real Life,” but it’s a sweet performance. 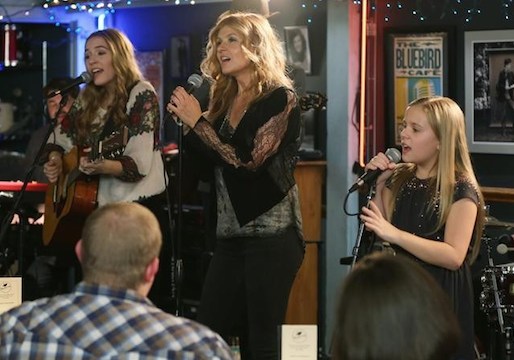 We also see M&D recording in their school’s Edgehill-sponsored studio — do you think the other kids are like, “Come ON! They can get in a studio any time they want! Give someone else a chance!”? — and Jeff, who’s desperate for a new smash artist, salivates in the corner. He wants to sign Maddie to Edgehill to be the next Taylor Swift or something, and when Teddy puts up some resistance, the Smirky Turtle goes nuclear: If Teddy doesn’t play ball, he’ll make the mayor’s dalliance with Ol’ Leopard Panties the Hooker public knowledge. “Sign. Now,” Jeff instructs him. (And if you watched the trailer for next week’s episode, you know that Teddy caves like a snow fort in a heat wave.)

AROUND TOWN | Elsewhere, Sadie makes reference to her ex-husband giving her trouble, but she’s still covering her bruises with make-up, and she cries as she makes excuses to Bucky about missing Rayna’s show… Gunnar travels to Austin, educates a petulant Micah about his real father’s better attributes, and retrieves a box of mementos from his relationship with Kiley. I tell you this because the photo of a long-haired Sam Palladio is something worth seeing… Juliette is frustrated because her pregnant largeness is making it hard for her to get enough breath to sing well/finish her album. And I tell you this because I have never related to anyone on this show more than I do Juliette when she’s gasping for air because the alien inside her is encroaching on her lungs. I spent most of my pregnancy sounding like Darth Vader by way of a Mucinex ad and shimmying from side to side in a vain effort to get my daughter to dislodge her gigantic skull from under my ribs. The next time you see a preggo trying to catch her breath, be a good do bee and offer her a hand… or an oxygen mask… or volunteer to carry her for a block or two, would ya?