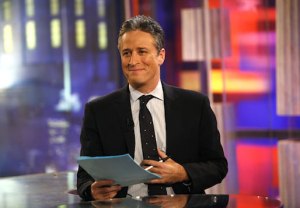 Not long after host Jon Stewart on Tuesday announced his imminent departure from The Daily Show, the deafening chatter began.

Who would replace Stewart? Who should replace him? Should the Comedy Central staple stay the course, or should it try something new with its next faux anchor? Everywhere, from your Facebook feed to the evening news, somebody was talking about what was next for the satirical series.

Amid the ongoing cacophony, allow this idea to serve as your Moment of Zen: Perhaps no one should replace Stewart when he eventually vacates the fake news desk.

Maybe it’s time for The Daily Show to come to an end.

Sure, the series survived — and thrived — after Stewart succeeded original host Craig Kilborn in 1999. And there’s an argument to be made that a third host (perhaps correspondents Jessica Williams, Jason Jones or Samantha Bee, solo or in some combination) could have a similar, revitalizing affect on the 19-year-old series.

Similarly, a replacement from the outside (The Talk‘s Aisha Tyler, @midnight‘s Chris Hardwick or comedienne Sarah Silverman, for example) might take The Daily Show in a new direction that would spiff up — or, at least, change up — the format.

But would any replacement so thoroughly become the series the way Stewart has? Would anyone have the unique mix of intelligence, humor and geopolitical awareness with which Stewart has imbued each of his broadcasts?

RELATED Jon Stewart Leaving The Daily Show in 2015 — Can He Be Replaced?

John Oliver, you say? True, while Stewart took leave to direct the film Rosewater in 2013, Oliver broke the show, danced with Danger and did an admirable job of keeping the host’s seat warm. But then HBO came calling, Last Week Tonight took shape and gained speed, and there’s no chance the Brit is coming back now.

This discussion is almost certainly an academic one; Comedy Central is more likely to greenlight Sen. Mitch McConnell’s Turtle Time than to put an end to one of its best-performing brands. If the Daily Show nabs a brighter-than-average replacement — and the post-Stewart writing staff stays pretty much intact — it’s possible to imagine the series bumping along comfortably for a few more years, at least.

But should it? The same way that The Colbert Report was Stephen Colbert, The Daily Show has become Jon Stewart. He’s the reason we stay up each night (and/or seek out clips online the next morning), and he’s the person (for better or worse) many of us trust to give us a sense of what’s going on in the world.

Comedy Central, meet me at Camera 3: Please be the first network in history to allow a top-performing series to go out in its prime. Please allow Stewart’s Daily Show tenure to stand as an example of how amazing television can be when it’s smart, sharp and unafraid to take a risk. And rather than trying to reboot/reinvent what has already been done to perfection, please make an unexpected choice — knowing your courage will be the springboard for whatever comes next.

Agree? Disagree? Let us hear it in the comments!