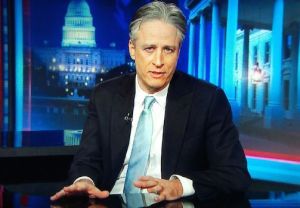 At the taping of Tuesday’s The Daily Show, Jon Stewart opened up about his decision to leave the Comedy Central program he has called home since 1999 — including how a “restless” feeling played into it.

“I’m not gonna try to sum up what this place has meant to me over the years… I’ve got plenty of time,” he said of his exit, which will come as early as July or as late as December. “I’m not going anywhere tomorrow. But this show doesn’t deserve an even slightly restless host, and neither do you.”

After singing the Daily Show team’s praises and saying he will “miss coming here every day,” Stewart got a bit emotional, saying that his tenure on the program has “been an absolute privilege, the honor of my professional life. And I thank you for watching it, for hate-watching it… Whatever reason you were tuning in for.” As he explained, “You get into this business with the idea that maybe you have a point of view and something to express, and to receive feedback from that is the greatest feeling in the world. And I thank you.”

Stewart fought back tears toward the end of his brief, end-of-episode speech, to the point that he amusingly aped Frankenstein’s monster, crowing, “What is this fluid [in my eyes]?! What are these feelings?!”

As for what his “restless” nature is telling him to do after his Daily Show run ends, Stewart said, “I don’t have any specific plans,” just “a lotta ideas, a lotta things in my head” — including spending quality time with his wife Tracey Lynn and their two children.

“I’m going to have dinner,” he avowed, “on a school night, with my family — who I have heard… from multiple sources… are lovely people.”