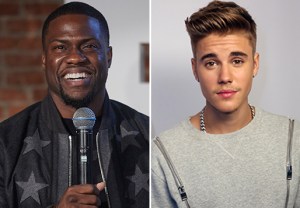 A roast master has been selected for Justin Bieber’s upcoming Comedy Central ambush, a position for which there was apparently no height requirement.

Kevin Hart (Real Husbands of Hollywood) will lead the charge during the Biebs’ roast (March 30, 10/9c), the network announced Monday.

“I don’t normally do roasts, but I had to step out for my guy Biebs,” Hart said in a statement. “It’s his big 21. It’s about to be Operation: Roast Everyone’s Ass.”

* Kardashian mom Kris Jenner will play herself on an upcoming episode of The Mindy Project, TVLine has confirmed. Star/series creator Mindy Kaling announced the momager’s cameo via her Instagram feed on Monday.

* The first episode of HBO’s The Jinx: The Life and Deaths of Robert Durst, which premiered Sunday, is now available to stream on YouTube. Behold: