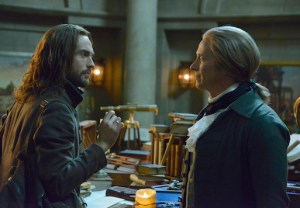 Unpopular opinion of the week: Monday’s Sleepy Hollow could have benefitted from more Katrina.

I know. For at least half the season, I’ve been advocating reduced screen time for the witch — or, at least, a purpose for her that’s more than wringing of hands and botching of spells.

But after the ending to last week’s episode, in which it appeared that Red had accidentally catapaulted over to the dark side, I really wanted to see what Mrs. Crane was up to.

Instead, we get a few scant moments of the witch’s slow slide into evil, and they come only after a Founding Father guilt-trips the Witnesses for the terrible crime of… being decent human beings. Way to be a buzzkill, TJeff.

Read on for what goes down in “What Lies Beneath.”

BLAST FROM THE PAST | Three on-the-job construction workers stumble across a hatch in the tunnels under the city, and before I can yell “Penny!,” some very gross creatures drag the workers in. As Ichabod and Abbie investigate, she notices a good-looking guy with a camera snapping away. His name is Calvin Riggs (played by ER‘s Sharif Atkins), he’s a journalist with combat experience, and his brother is one of the missing workers. Oh, and he doesn’t trust Abs to tell him the truth about anything.

The Witnesses crawl down the hole but are chased out by the same monsters that grabbed the workers… and Riggs is right there, demanding answers as Abs and Ich catch their breath by the hatch.

Abbie agrees to give Riggs limited access to the investigation (did I mention he was cute?), a move Ichabod thinks is rash. But there’s not much time to debate, because Crane and Mills are going back down to deal with the heinous beasties.

Once they dispatch a few uglies, they come to the “fenestella” — a chamber Thomas Jefferson designed way back in the day. And guess who’s still inside there? The third American president himself. Allow me to echo the sentiment etched on both Ichabod and Abbie’s faces when I say: In the what-what?

FIRE IN THE HOLE! | As the bewigged one (played by Wings‘ Steven Weber) informs the Witnesses, he’s not really there: He’s just a mystical-infused hologram with all of the thoughts, memories and feelings of the long-dead Founding Father. (The monsters, by the way, are supernaturally warped versions of Washington’s soldiers called reavers.)

Ichabod is enchanted; he looked up to Jefferson back in the day (Ich even script-doctored the Declaration of Independence), but was hurt when Jefferson “unfriended” him. Holo-son explains that he had to: He always knew Ichabod was going to be a Witness, but had to withhold that information until the time was right. And this room he built? “”Everything Washington and I learned about the Witnesses is in this chamber,” Jefferson tells Ichabod.

After Abbie locates the missing workers hiding from the reavers, here’s a lot of back and forth over what’s more worth of saving: the tunnel (and the information-filled fenestella) or the captive workers’ lives… but you know our pals aren’t going to sacrifice their common man, so it just feels a little bit stake-less. The Witnesses free the workers, Ich blows up the hologram and the reavers, and Riggs flirts with Abbie a little before bidding her goodbye.

RUNE IN TOMORROW | Elsewhere, Frank enlists Jenny’s help to break into the sheriff’s department evidence room… but she doesn’t buy his story that he’s just trying to recover some personal effects. When she catches him with a Hellfire Club ledger and flash drive, he knocks her up against the wall and starts to flee. When she catches up to him, he claims that he’s been evil since he came back but has brief flashes of goodness — thanks to a rune he implanted in his palm right before he died as a means of thwarting Henry’s I’ve-got-your-soul thing. (The rune also snowed Katrina during that supernatural lie-detector test a few weeks back. Shocking? Nope.)

Frank wants Jenny to give Cynthia and Macey the flash drive, which will give them access to the Hellfire Club’s offshore accounts and cover their needs for the future. Jenny agrees. Is Irving lying? And what’s his good-to-bad ratio at any given moment? If you’ve got a theory, comment early and comment often!

‘FOR OUR KIND’ | And now, the witch. Katrina wakes from a nap on the couch to see Henry sitting in front of her, clutching dead roses and telling her, “I killed Moloch for you, mother. For our kind. It’s time for us to begin our work.” When she takes the flowers, the thorns cut her… and then she wakes up. But her hands are still bleeding, and the roses are on the chair, so this mother and child reunion is twisted, and it. is. on. (See what I mean? Give us a little more, Sleepy writers!)