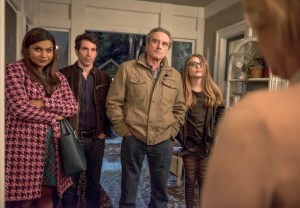 Almost all of Danny Castellano’s family stuck in a small house in Queens? “Old, furious feelings” flying free? Annette in a blonde wig?

This Tuesday’s Mindy Project sounds like our idea of a party.

In the exclusive video below, star/series creator Mindy Kaling sets up the contentious episode, in which Danny brings his visiting father (returning guest star — and Rhea Perlman’s Cheers ex-hubby — Dan Hedaya) and half sister (Madison Moellers, Mistresses) to dinner at his ma’s place.

Also at the meal: Annette’s new guy Dr. Ledreau and Dot (of course!), who doesn’t disappoint at the end of the clip. But we were left wondering: Where’s Richie? And when is Mindy going to share her humungous news with Big Daddy Danny?

Press PLAY on the video below to watch it all play out.