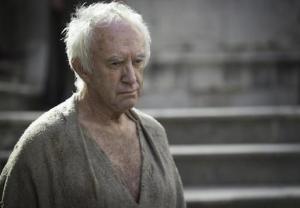 By the old gods and the new, April is still really far away.

To ease the wait before Game of Thrones returns for its fifth season on April 12, HBO on Sunday aired a behind-the-scenes featurette covering location shoots in Dubrovnik, Croatia; Seville, Spain; and Belfast, Northern Ireland.

There was a lot to like in the lavishly shot documentary, which captured the action on the three sets. Some highlights:

* The crew carrying all of the gear by hand up Dubrovnik’s twisty, narrow streets — and Lena Headey following them, Cersei’s tresses clipped up high on her head… not to mention Headey joking around in between scenes (so jarring when she’s dressed like the bitchy queen, no?)

* Shots of Jonathan Pryce dressed as the High Sparrow

* The sunny shots of the Real Alcázar of Seville, a historic site which will stand in for the Water Gardens of Dorne

* Ireland’s Magheramorne Quarry, which will stand in for a fishing village north of the Wall this season (and has been the site of Castle Black and King’s Landing sets in the past)

* Watching the production crew wrangle 120 extras — and the costumes and hair/makeup, etc. that go along with them (who else loved the directive to make one woman look “less healthy”?)

* Watch the crew prepare a bullring in Osuna, Spain, for a single scene that will take 12 days to shoot

What did you think of A Day in the Life? Feel free to re-watch the featurette below, then sound off in the comments!