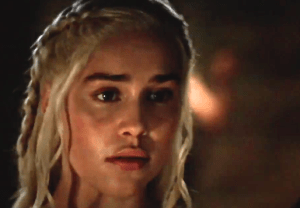 “The seven kingdoms needs a ruler loved by millions with a powerful army and the right family name,” Lord Varys tells Tyrion in the first trailer for Game of Thrones‘ fifth season, causing the Lannister sibling to scoff, “Good luck finding him.”

“Who said anything about ‘him,'” the Spider replies, we cut to a shot of Daenerys, and we’re off!

The roughly two-minute video, which is airing as part of the HBO series being shown in IMAX theaters across the country, gives us plenty to look at/obsess over.

After an unofficial video — which was apparently shot by someone who attended one of the first IMAX screenings — made the rounds on the Web Friday morning, HBO released the official trailer, which can be viewed in full below.

Among the visuals you’ll see: the Sand Snakes; Tyrion on the lam; Arya handling Needle in Braavos; Ser Jorah doing battle; Dany asserting that she won’t “stop the wheel,” she will “break the wheel;” Littlefinger exhorting Sansa to create her own justice; Margaery wedding Tommen; major destruction in the form of a falling golden statue; Jon Snow leading men into battle; and, of course, blood and sex and dragons.

Press PLAY on the video below to get your first taste of Season 5 — which bows April 12 — then hit the comments with your snap judgments!