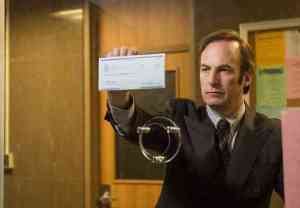 Long before Saul Goodman ever heard the name Heisenberg, he was a struggling New Mexico lawyer with a pile of debt collection notices and a flair for the dramatic.

In a moment, we’ll ask you to give us your thoughts on the AMC spinoff. First, though, a brief recap of Sunday night’s premiere.

You’ll recall that Saul had himself disappeared in Bad‘s finale; we watched him bid Walt goodbye as he began a new life under a new name. The series starts by showing us Saul’s life in what appears to be present-day Omaha: He’s got less hair on his head and more on his face than he did the last time we saw him, he’s calling himself Gene, and he’s the manager of a mall Cinnabon. Shot in black and white, Gene’s existence is lonely and mundane; only when he pulls out a VHS tape of his old “Better Call Saul!” legal commercials does any color enter the picture.

When the hour returns from the opening credits, it skips the Bad years and travels way back to the early years of Saul’s legal career. He’s got a different name here, too — James “Jimmy” McGill, which turns out to be his real one.

Jimmy’s rickety operation is run out of the back of a nail salon and is in desperate need of clients, a fact he tries to hide from a semi-interested couple (the husband’s been accused of embezzlement) whose business he courts throughout the episode.

RELATED Better Call Saul EPs on Bad Prequel: ‘We Want This to Stand on Its Own’

When Jimmy learns that the pair also is meeting with Hamlin, Hamlin & McGill — the firm that employs his brother, Chuck — he goes on the offensive by enlisting the talents of some low-rent con artists to coerce the wife into hiring him instead. Their elaborate plan, of course, goes south quickly, and Part 1 of the two-night premiere ends with Jimmy staring down the barrel of a gun wielded by… Breaking Baddie Tuco Salamanca?!

Though Saul is enjoyable in its own right — its flawed protagonist and his talented portrayer Bob Odenkirk are more than capable of holding your attention for an hour each week, and its relaxed storytelling is a nice counterpoint to Bad‘s breakneck speed — the nods to the mothership series are still a treat.

Right away, we see Bad hitman Mike Ehrmantraut, who at this point in the timeline is a parking lot attendant with no desire to do Jimmy any favors. And it made me chuckle when, while meeting with the (alleged!) embezzler and his wife, Jimmy says, “Frankly, I don’t go looking for guilty people to represent. Who needs that aggravation?”

Also intriguing: Jimmy’s relationship with Chuck (played by Saturday Night Live alum Michael McKean), who is as guile-free as his brother is shifty and who foregoes electricity in his home out of a belief that electromagnetic fields adversely affect the (unspecified) illness from which he suffers. Um, OK? Also, there’s got to be more behind Jimmy’s hatred for his brothers’ employers than we see in this first hour, right?

All told, I’ll be tuning in for the second half of the premiere tomorrow night. But now we want to hear what you thought of the episode. Grade Better Call Saul via the poll below, then expand on your choice in the comments.