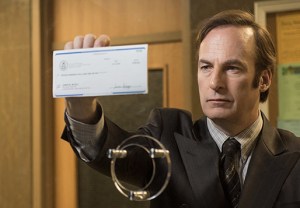 If you’re looking for a reunion with Walter White and Jesse Pinkman, you’ll have to get your fix on Netflix.

Even though AMC’s upcoming drama Better Call Saul will feature some familiar Breaking Bad faces, its dynamic duo will not appear in the prequel’s first season.

“In the spirit of full disclosure, Walt and Jesse will not appear in Season 1,” showrunner Peter Gould said Saturday at the Television Critics Association winter press tour in Pasadena. “We want this to stand on its own. We don’t want to mislead people into something that’s not going to happen. But having said that, everything else is on the table.”

The spinoff takes place six years before the events of Breaking Bad, when lawyer Saul Goodman — known as Jimmy McGill — is hustling to make ends meet. Bob Odenkirk reprises the titular character, as does Jonathan Banks in the role of fixer Mike Ehrmantraut. 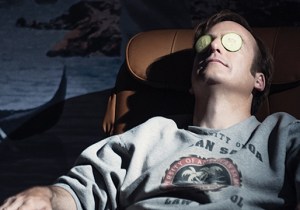 A few words come to mind when thinking of Saul — corrupt? slimy? — but Gould asserts that Jimmy has a very different personality in the prequel.

“You’re remembering what a slippery, two-faced, unethical guy Saul Goodman was on Breaking Bad. What we found is that wasn’t the guy we were starting with,” he said. “There’s a lot of nuance to his ethics.”

Showrunner Vince Gilligan echoed Gould’s sentiment: “It’s an interesting examination of, ‘Why are we good? Why do we choose to be good?’ The fun and challenge for us is exploring those things and learning about them as we do.”

Given that the events of Breaking Bad unfolded rather briskly, Gilligan and Gould said they may take a different approach to storytelling with Saul.

“We have a history with these characters, so we’ve given ourselves the freedom to go back and forth in time,” Gould said.

Gilligan added: “Walt had cancer, and he didn’t know how much time he had. By necessity, that show had very accelerated storytelling. We don’t have that issue with Jimmy McGill.”

All told, Gilligan does feel some pressure to live up to Breaking Bad‘s standards — but he’s not letting that stop him.

“This is certainly a risk, and I was scared the whole time,” Gilligan said. “I don’t know if the world’s going to like this thing, but I really do. It is a godd-mn good show, in my opinion.”

Will you be tuning in to Better Call Saul? Hit the comments with your thoughts on the series.