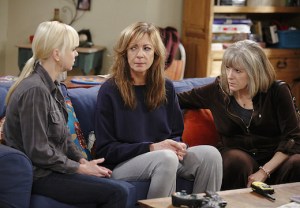 THE EPISODE | “Three Smiles and an Unpainted Ceiling”

THE PERFORMANCE | Allison Janney’s versatility as an actress isn’t exactly a secret, not after taking home a pair of Emmys last year — one for Guest Actress in a Drama (for Masters of Sex) and the other for Supporting Actress in a Comedy (for Mom). But on Thursday’s installment of the CBS comedy, as recovering alcoholic Bonnie coped with the death of her recently rekindled love Alvin (played by Kevin Pollak), Janney undeniably reconfirmed her ability to make us weep and leave us laughing.

The episode kicked off with Alvin renting the apartment across from Bonnie’s — and Janney let us see the giddiness in her typically cynical character’s eyes — but Alvin’s fatal heart attack in the midst of a tryst abruptly ended the happiest chapter of her hardscrabble life story. The aftermath, remarkably, found Janney nailing broad physical comedy (as Bonnie barreled down a hallway, with daughter Christy wrapped around her waist in an attempt to stop her from crashing Alvin’s funeral); heartbreaking grief (as she struggled to share her latest tragedy at an AA meeting); and delicious bitchery (Bonnie spoke her truth to a crowd of mourners, despite the protests of Alvin’s estranged wife).

Two moments, though, illustrated Janney’s subtle mastery of her craft. In the episode’s coda, as Christy broke down and acknowledged her own grief over the loss of her father, Bonnie wordlessly rubbed her daughter’s back and then embraced her with such tenderness that you could feel a lifetime of maternal love coursing through the room.

Just as impressive was a bar scene that found shellshocked Bonnie contemplating a break from sobriety, despite Christy’s pleas. “I just can’t go back to being alone,” cried Bonnie, a shell of her typical towering self. When her daughter offered a reassuring “You got me,” Janney’s deliciously droll line-reading — an exaggerated “Meh!” — told us in a single syllable that Bonnie had found the strength not to relapse, remembered her obligations to her extended family, and (as Mom often underscores) relearned the importance of hanging on to your sense of humor even in the darkest moments.

HONORABLE MENTION | In recent weeks, it’s been hard to tell where Lauren Graham ends and Parenthood‘s Sarah Braverman begins. As the series nears its emotional conclusion, Graham has delivered some of her most sincere performances of the past six seasons. This week, it only took a few phrases for her to communicate Sarah’s deep love for her family (and Graham’s connection with her soon-to-be former co-stars). Even when Sarah was at her most devastated (“I just want to make sure that my dad is there,” she cried to Hank regarding their upcoming wedding), Graham’s performance remained authentic. Though it would be easy to define Sarah by her missteps in life, Graham’s most recent performance reminded us of her character’s deep complexity. To echo a statement made by Mae Whitman’s Amber: Graham is our hero.

HONORABLE MENTION | It’s amusing that the secret weapon of HBO’s Girls just so happens to be a boy: Andrew Rannells’ self-absorbed, sexy imp Elijah. In last Sunday’s installment, Elijah and fellow twentysomething Hannah crashed a student house party in Iowa, giving Rannells the chance to score huge laughs with a bawdy dance-floor sequence and the seduction of a naïve undergrad in a cramped bathroom. Rannells’ ability to play shamelessly hedonistic — and at the same time deliciously arch — is pretty much comedic perfection. “I love you so much. I hate everyone who isn’t you,” Hannah declared to Elijah upon his unexpected arrival. In the addictive but often maddening world of Lena Dunham’s Sunday-night dramedy, we often feel the same exact way.

HONORABLE MENTION | The fact that, during Thursday’s Vampire Diaries, we were moved just as deeply by Caroline as by Sheriff Forbes — a beloved character who’s literally dying right before our eyes — is a testament to the level of humanity Candice Accola still brings to her definitively nonhuman character. Despite everything Caroline’s been through, Accola has abandoned neither the vulnerability nor the insecurity of her character’s living years, which made her scenes with Marguerite McIntyre all the more heartbreaking and her moments opposite director Paul Wesley all the more hopeful.