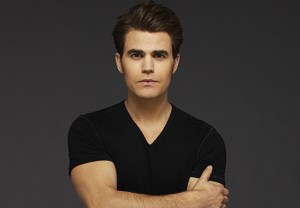 “I loved the last episode I directed, but I actually prefer this episode,” Wesley says, referring to “Resident Evil,” Season 5’s what-if hour. “It was a different energy, it was nostalgic and very slow. There’s something about the pacing of this next one that makes it really engaging.”

Read on for our full Q&A with Wesley, which touches upon — among other developments — the director’s favorite moment from tonight’s episode, his thoughts about Caroline essentially becoming Elena’s replacement in Stefan’s life and how he feels about losing Steven R. McQueen at the end of the season.

TVLINE | How is it decided which episode you’re going to direct? The last one was pretty Stefan-heavy, which must have been difficult.
We don’t get the scripts until maybe two weeks before we film — sometimes it’s more like the day before — and I think they arbitrarily choose an episode number, depending on director availability. When they go to write that episode, they keep in mind that I’m directing it, so they try not to make it Stefan-heavy. This particular episode coming up is certainly not Stefan-heavy, but it’s also not Stefan-light, because he is one of the main characters. There are other characters, like Caroline, Sheriff Forbes, Kai and Elena, whose workloads are much more heavy than mine.

TVLINE | What was the biggest change between your first time directing and this one?
People came up to me this time and said, “You’re so relaxed and calm.” I was really nervous my first time, and while I still had some jitters this time around, it was much easier. I knew what I wanted to do and I knew what everyone was capable of. You share your vision and you trust a lot of people; you can’t try to micro-manage everything. It’s really important for directors to let people do the jobs they’re good at, which is something I learned. 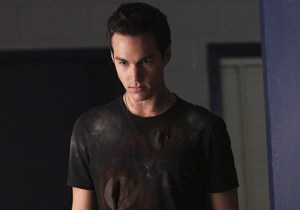 TVLINE | Which actor surprised you the most as a director this time?
It’s interesting to work with guest stars or recurring actors because they haven’t been on the show for six years, so they can surprise you. They make you go, “Oh! I didn’t expect you to say your line that way.” The series regulars, including myself, all have a cadence and a disposition that we’ve assigned to our characters. … Chris Wood is so good in my episode. He really is so great, the perfect blend of dark humor and true danger, just a really talented guy. Candice Accola and Marguerite MacIntyre also really nailed it in this episode. They’ve got some great stuff.

TVLINE | Is there a specific scene you’re excited for us to see?
There’s a scene at the end of the episode, the final sequence, and it really puts my episode on the map in terms of having an effect. It’s really effecting. I don’t want to reveal what happens, but it’s a scene that has a really interesting twist and leaves you going, “Oh, s—t!”

TVLINE | What would you say Stefan’s main focus is right now?
In a weird way, his main focus is Caroline. That’s sort of been his M.O. lately. She’s sort of a huge part of his life now as a friend. Stefan and Elena were so inseparable, bonded, etc., and Caroline and Stefan are now sort of the duo. Everything he does revolves around Caroline at this point.

TVLINE | You’ve always been a big supporter of Stefan and Caroline’s relationship. Why do you think they work well together?
Honestly, I’m just a fan of Stefan doing anything unexpected. I’m a fan of any character that does something people would find uncharacteristic of them, but not something arbitrary just for the sake of being arbitrary. Our characters are vampires, they’re hundreds of years old and I just think Stefan should remember that he’s an old soul who can do crazy things once in a while. The minute a character becomes predictable, it becomes a little boring. 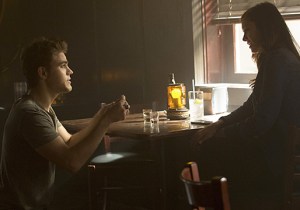 TVLINE | Stefan’s fake proposal to Elena earlier this season was definitely unpredictable. Is the door still open for those two?
I’m telling you, all it takes is one shift in writing. All it takes is one intelligently shifted moment or new storyline to sort of diverge and — boom! — we’re back on the Stefan and Elena train. I have no idea what the writers are doing or planning on doing or if that’s something they’re even interested in, but I wouldn’t eliminate anything from the equation.

TVLINE | Lastly, how do you feel about losing Jeremy — and Steven R. McQueen as a series regular — next year?
It’s weird. We’ve gone through this before, but certainly not in Season 6. I love Steven. He’s such a sweet and nice and kind kid. Of course it’s sad, you know, but he’s a young actor, we’re in Season 6 and I’m excited to see what he does next.

How are you hoping Elena and Caroline factor into Stefan’s future? Do you think the vamps will find a way to save Sheriff Forbes? And will you miss Jeremy/McQueen next season? Drop a comment with all of your thoughts below.