Breaking news: Everything we’ve ever known is a lie. More specifically, the prophecy about Elena and Stefan being destined to end up together is a lie — just one of the many surprises delivered by Thursday’s Vampire Diaries.

Elena and Stefan spent much of the hour sharing visions of an alternate reality, one in which they’re together, happy — and, most notably, human. In this glorious utopia, they’ve got two adorable children (one is a “biter”) and none of their family members have been murked by the undead. Seriously, none.

Naturally, Caroline chalked those visions up to the doppelganger prophecy, but as Damon and Enzo learned during a chat with Markos, the visions were merely part of a spell he created 1,500 years ago. His end goal was simple: Help the Travelers through the use of doppelganger blood. No true love included.

But even after Markos hit CTRL+ALT+DEL on the exes’ visions, Stefan and Elena still reflected on what could have been. “I will always love you, Elena,” Stefan told her, to which she instantly responded, “I will always love you, too.” Then Elena went and ruined the moment by asking if Stefan thought she and Damon would ever have that same closeness. (My guess? Probably not. We all know Damon and emotions are like oil and water.) Speaking of which, Damon confronted Elena at the end of the episode, informing her that they’re no longer friends. It was obvious to the viewers that Damon was merely acting in accordance to Stefan’s philosophy — you can either be someone’s friend, like Stefan and Elena, or be in love with them — but Elena was still pretty torn up about it. Hopefully she’s reading this recap and will soon understand.

OFF-SIDES | Um… What’s the deal with Tyler? Not only is he apparently working with Markos, but he even delivered the Traveler knife to him at the end of the episode. (Update: Thanks to Twitter, I now know Tyler has a Traveler inside him. My cable cut out and I missed the scene where he was possessed. Namaste.)

FAMILIAR FACES | After being stabbed by a possessed Sheriff Forbes, Matt found himself on the Other Side, surrounded by familiar faces, both friendly (Vicki!) and unfriendly (Kol!) He also got a first-hand look at the disintegration of the Other Side, which Grams had previously warned Bonnie about. We still don’t know exactly what’s going on, but Vicki was pulled away from Matt the same way Katherine was pulled away from Bonnie shortly after her death. Hopefully, wherever they are now, they’re together. They never did get a chance to meet, did they?

ALL GOOD | Jeremy and Bonnie finally had “the talk” this week — awkwardly interrupted by Matt’s gasps for life, but whatever — and it looks like their relationship isn’t in as much jeopardy as she thought. She agreed to let him do his thing, but asked him not to put her in a position where she’d have to question him. We’ll see how long that lasts.

What’s your take on this week’s Vampire Diaries? Was this episode the final nail in Stefan and Elena’s coffin (so to speak)? And what’s really going on with Tyler? Browse pics from the episode below, then drop a comment with your review. 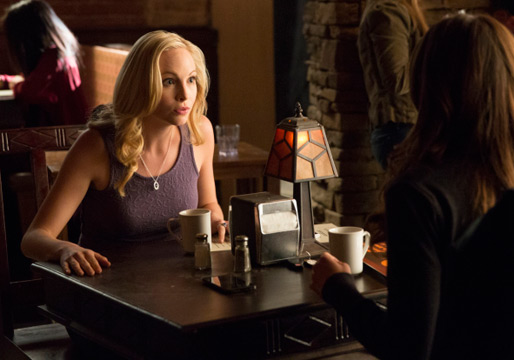