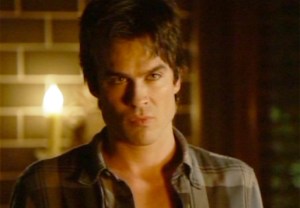 Via the time-honored art of flashbacks, Thursday’s Vampire Diaries dropped a paternity bombshell of Maury Povich proportions that rattled the Salvatore family tree — not to mention Jeremy’s delicate little brain.

RELATED Vampire Diaries Photos: Stefan and Caroline Get Back to Nature

It turns out Little Orphan Sarah, as she’ll henceforth be known, is the daughter of Stefan and Damon’s uncle/nephew Zach! Back in 1994, Damon returned to the mansion and murked Gail, Zach’s pregnant girlfriend, whose baby (Sarah!) barely survived an emergency delivery. So I guess at least one Salvatore is able to call Mystic Falls home for the time being. #Progress

(Side note: When Damon said he did “the worst thing I’ve ever done” in 1994, then showed Stefan the headline about Kurt Cobain’s death, did anyone else inaccurately put two and two together like I did? Gotta say, I’m a little relieved Damon had nothing to do with that tragedy.)

But even with that twisted confession now out in the open, Damon’s whole flashback became relatively moot when Kai — aka Malachai — revealed that Damon’s “personal” hell is actually his hell, a prison created by the Gemini coven as punishment for murdering his family members. Kai may hold the key to getting Damon and Bonnie back to their loved ones, but it looks there’ll still be hell to pay (pun obviously intended). 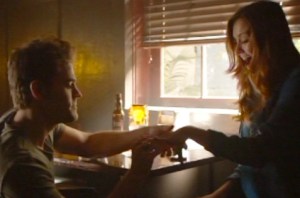 THE EX-FACTOR | Over in present-day non-hell, Elena and Stefan bonded over drinks, jokes and… a proposal? Yes, long-suffering Stelena fans finally got to see Mr. Hero Hair get down on one knee — even if it was all in the name of teaching Elena how to reinvent herself. Their fun day out took a sour turn, however, when Stefan broke the No. 1 rule of compulsion by telling Elena everything she made Alaric help her forget.

“You were in love with him, and he was in love with you,” Stefan reminded her of his brother. “When he died, a part of you died, too. … Damon inspired you, he pushed you to own the darkest parts of yourself.” Elena was, understandably, taken aback.

Of course, she wasn’t quite as taken aback as Stefan was in the episode’s final moments, when a certain presumed-dead girlfriend stopped by his garage. Enzo apparently fed Ivy his blood before he killed her, and now we’ve got ourselves another vampire — which is great because, really, I was afraid we were going to run out. 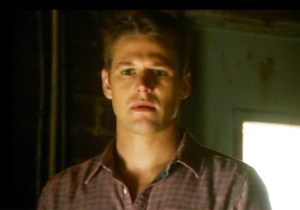 SCARED STRAIGHT | Speaking of Enzo, Tripp finally told Matt about his vampire-killing operation, which included a tour of his little prison — and an introduction to his naughty British prisoner. According to Tripp, his wife was killed by a vampire who then compelled him to believe he was responsible for her death, so he plans on using Enzo to expose every other bloodsucker. I think Matt’s face says what we’re all thinking: “Oh, s—t.”

HARD-KNOCKS | Meanwhile, Jeremy finally met his emo-match in Alaric, who literally knocked some sense into the young hunter, explaining that his misery over Bonnie’s death is no excuse to spend the rest of his life in a drunken stupor (no matter how entertaining said stupor might be for the audience). I guess when you put Bonnie up against everyone Alaric’s lost — his wife, his girlfriend, his humanity — one little Bennett doesn’t seem so bad. (And speaking of girlfriends, I’m loving the chemistry between Alaric and Jo. More of that, please!)

So, TVD fans, were you surprised by Sarah’s big reveal? Did you enjoy Stefan and Elena’s, albeit jokey, proposal? And what do you make of Kai now that we know his dirty little secret? Browse photos from upcoming episodes below, then drop a comment with your review of this week’s hour.