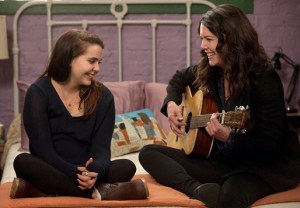 The title of Parenthood’s penultimate episode — “We Made It Through the Night” — could just as easily describe the NBC drama’s viewing audience as accurately as it does the family at its center.

Even though many of us are now emotionally compromised from watching Thursday’s installment, we are indeed nearing the end of the Bravermans’ on-screen journey — and this week’s events, while tearjerking (duh), seem to be bringing the beloved series to a sweet conclusion.

After all, how could you not love the episode’s tender moments? Adam helping a student make the perfect soufflé? Sarah and Amber’s lovely duet? Amber naming her son Zeek?! (Speaking of which, would it be inappropriate to write the remainder of this recap solely through the use of iPhone’s ugly-cry emoji? I swear I’m a professional.)

But I’m getting ahead of myself. Let’s break down what the Bravermans encountered in the second-to-last… sniff… episode… sniff… ever. (There’s that ugly-cry emoji rearing its head again!)

ZEEK & HIS SONS | After his latest stint in the hospital, it’s time for Zeek to make a decision about his heart. While on a hike with Camille — which seems remarkably dangerous to me — Zeek admits that he doesn’t want to undergo another risky operation, preferring instead to enjoy the time he has left. And what better way to break the news to the kids than at a family dinner with the Original Six?

Well, as most get-togethers with Crosby and Adam have been going these days, the dinner quickly gets heated as the brothers reminisce about a childhood memory of… knife-wielding? The root problem, of course, is the uncertain future of The Luncheonette. After Crosby learns about Jasmine’s under-the-radar chat with Adam, he feels his older brother is pitying him and decides to leave the recording studio after all. (Was that the sound of 4 million viewers sighing at once? Or just me?)

Fortunately, the entire episode isn’t a wash for Adam, who unearths his long-lost love for French cuisine throughout the hour. When a Chambers Academy student asks Adam to be his mentor in the kitchen for the school’s career week, the eldest Braverman is happy to oblige. And, despite Max’s glass-half-empty outlook on the chances that Chambers’ students will ever find jobs, Adam and his mentee pull off quite the impressive soufflé.

JOEL & JULIA | It’s official: Joel is moving back in with the family! Yay, right? Well, Victor’s not totally convinced that his dad won’t bail again at the first sign of trouble, and he’s got a point. When Julia’s former beau, Chris, starts calling her about work, she and Joel open up a whole ‘nother can of worms — in other words, “How many people did you sleep with while we were apart, honey?”

Later, after Julia insists they need to air their grievances, Joel admits he’s too scared to argue with his wife again. But Julia’s too scared not to talk things out, and so they do. Outside in the car, the couple hashes out everything — Chris, Julia’s job, how many people she slept with — and although the conversation doesn’t exactly go smoothly, there is a happy ending: Joel and Julia wake up next to each other the next day, all smiles (and little clothing for Joel, which is totally fine with me).

SARAH & AMBER | OK, I confess. I haven’t always been #TeamHank as Sarah figured out her relationship with him, but he’s turned into a pretty cool guy and an excellent fiancée. Case in point? After Sarah tells Zeek that she’s going to be married, she confesses to Hank that she wants to have the wedding soon — like, the following weekend — because, “I just want to make sure that my dad is there.” (Lauren Graham, you are killing me.) Not only is Hank totally understanding, but the man who once couldn’t make eye contact with his own girlfriend is now able to tell her what a beautiful person she is, inside and out, thanks to Zeek. Well-played, Hank. Well-played.

As for Amber? Oh, no big deal. She’s just about to become a mom! Indeed, after suffering a false alarm a few nights prior, Amber’s positive that the baby is really on its way this time. And just as Sarah predicted, something shifts when Amber holds her child — who she names Zeek — and she doesn’t seem to feel that keeping the baby is a mistake (a fear she guiltily confessed to her mom earlier in the episode).

* “You’re my hero” (Amber to Sarah) and “I can hardly wait to walk you down the aisle” (Zeek to Sarah) are tied for Most Tearjerking Lines of the Hour.

* How have we not heard Lauren Graham and Mae Whitman sing together since, what, Season 2? And is that song available for download?

* Of all the episode-ending montages we’ve seen in these last six seasons, this week’s — set to a gorgeous cover of “Ave Maria” — ranks among my favorites. (Kristina’s thumbs-up apology to Jasmine was particularly adorable.)

* Did anyone else notice Adam briefly unleashing The Fever after he and Edgar mastered their soufflé? Fleeting, but awesome.

What were your favorite moments in Parenthood’s penultimate episode? Are you all stocked up on tissues for next week’s series (!) finale? Hit the comments!