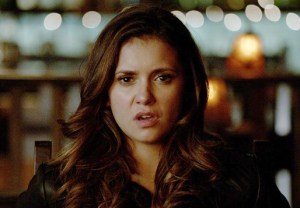 Kai dragged Elena back to Mystic Falls High in The Vampire Diaries‘ winter premiere for a stroll down memory lane — and an unhealthy dose of torture.

Damon convinced Liv to hit “pause” on her magic lessons with Jo and help him save Elena, but her fellow Wonder Twin wasn’t about to let his sister walk into #Kaimania, which left Jo — who, as Alaric noted, can “barely light a candle” — as Damon’s only cloaking option. (Side note: Did anyone else laugh out loud when Jo remarked, “What do you know, it worked!” I’m sure Damon wasn’t exactly thrilled to hear that from the mouth of his last line of defense.) 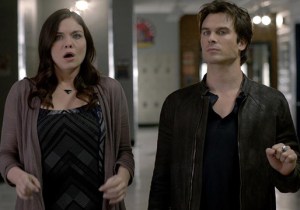 Jo was able to reunite the two halves of Delena, but it wasn’t long before she got a bloody nose — girl needs to get that wicked cocaine habit under control — and inadvertently exposed them all to Kai. What transpired was a terrifying display of Kai’s true power, as he used an illusion spell to convince Damon he was staking Kai… when he was really driving one right into Elena’s heart.

Fortunately, Jeremy — who was given a shirt by some awful person who hates this fandom — was waiting in the wings to shoot Kai with his mighty crossbow, followed by a little sedation action courtesy of Alaric. In the midst of all the chaos, Damon and Elena were also able to sneak in a pretty adorable moment, in which she pretended to still have a piece of a stake lodged in her heart, sending Damon into a (romantic) panic. Geez, Elena, twisted sense of humor, much? (Also, am I the only one pumped for that dinner she promised him?) 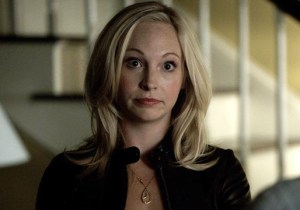 CARE-TOO-MUCH-OLINE FORBES | There’s no doubt about it: Candice Accola is this week’s TVD M.V.P. Even more so than Sheriff Forbes — who spent the hour spouting heartbreaking lines like “I’m not dead yet” — Caroline brought this recapper to tears several times throughout the hour, especially in her final scene, which featured a devastating monologue about why she needs her mother to live a full life. But just as Paul Wesley warned TVLine, this week’s episode featured a harrowing final twist: The brain cancer patient who received Caroline’s blood, the one she thought she saved, ended up dying sooner; the vampire blood actually progressed the cancer. (At least we got a really sweet Stefan-Caroline moment to help dull the pain. A little hand-holding goes a long way on this show.) 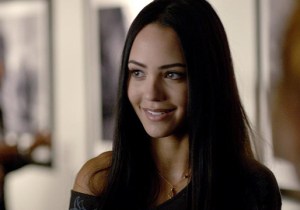 ENZO’S REVENGENDA | Was anyone else expecting more fireworks between Enzo and Stefan this week? Damon’s former BFF followed Stefan to Duke University, where he quickly put two and two together, figuring out that Sarah “Nelson” is actually Stefan’s great-niece Sarah Salvatore (four times removed. Or whatever.) But rather than expose Stefan’s secret, or even go for Sarah’s jugular, Enzo actually displayed — dare I say it — restraint. Then again, these words have me thinking he won’t sit on the sidelines for much longer: “The best revenge is patient, cultivated. He won’t see it coming before it’s too late.” Yikes.

TWINEQUALITY | Note to Tyler Lockwood: If you’re reading this recap, you might want to stop right about… now. After preventing his sister from heading straight into Kai’s clutches, Luke received an interesting wake-up call: As it turns out, he‘s the more powerful twin, something Liv has been noticing over the past couple of months. “If we merge, you win and I die,” she told him. (Oh, man… just when I was starting to warm up to her, too.)

TVD fans, was this not a crazy episode of television? Do you think Caroline will find a way to prevent her mom from suffering the same fate as her “guinea pig”? And which twin(s) do you want to survive? Drop a comment with your thoughts, as well as your review of the episode, below.