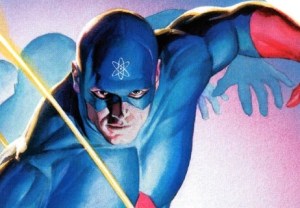 Arrow and The Flash may soon have some super company at The CW.

The Powers That Be behind the popular DC Comics TV series are in “very early talks” about a possible show centered on Atom/Ray Palmer.

At the Television Critics Association winter press tour, executive producers Greg Berlanti, Marc Guggenheim and Andrew Kreisberg revealed that they are working on a “very general idea” related to the character Brandon Routh plays in Arrow.

In addition to his myriad comic book appearances, Ray/The Atom — who can alter the size of his body as well as other objects — has turned up in numerous animated series, including, most recently, Cartoon Network’s Young Justice. Arrow marks one of the character’s rare live-action incarnations.

CW president Mark Pedowitz obliquely referenced a possible Atom series during the panel, saying that the network would be “judicious” about expanding its DC fare. “Could there be another hour in that universe? Possibly. As long as there’s no audience fatigue.”

The EPs wouldn’t elaborate on the project after the panel, saying only they weren’t allowed to comment further.

“When [the Arrow role] was proposed, I was hesitant to step into DC world again,” said the former Superman Returns star. “I never thought it would happen and that I would play, in my mind, a pivotal character.”

Other highlights from the Arrow and Flash panel:

* Talking about the multitude of costumed crusaders in Starling City, Guggenheim noted, “Ray is on a slightly different track than the other members of Team Arrow. His connection is through Felicity.” Meanwhile, Oliver is “seeing the crusade grow beyond him,” which ties into the plan for Season 3.

* Star Stephen Amell learned of Oliver’s demise before Season 3 started shooting. “I personally love when there’s adversity for the protagonist,” he said. “If we don’t give other characters the opportunity to shoulder the load, then we give viewers nothing to attach them to. I’m excited for everyone’s opportunity.”

* Dr. Wells is “the man in the yellow suit. Yes, I am Reverse Flash,” Tom Cavanagh confirmed.

* Eddie Thawne’s name on The Flash is “not an accident” and his connection to the comic book lore will “pay off big time in back half of the year,” Kreisberg teased.