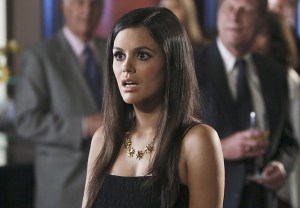 The CW might supersize Arrow‘s super world even further, it was hinted Sunday at the Television Critics Association winter press tour.

With Arrow and its offshoot The Flash flourishing in the wake of their two-night crossover, CW president Mark Pedowitz said, “We are having some preliminary discussions about expanding [that] universe, but we have not vetted them out.” Stressing the need to be “judicious” about adding more DC Comics fare, he posed, “Could there be another hour in that universe? Possibly. As long as there’s no audience fatigue.”

As for future Arrow/Flash crossover events, Pedowitz sees them being an annual fourth-quarter thing a la Doctor Who‘s Christmas specials.

All told, Pedowitz is happy with the network’s current balance of genre vs. non-genre fare. For one, he noted, “We’ve gone from a 70/30 [female/male viewer] mix to 60/40. So we’ve brought men back to the fold.”

Other topics tackled during The CW’s execution session at TCA:

* It is “not necessarily” Hart of Dixie‘s final season, Pedowitz said. With only the second episode of the current season airing this Friday, “We have to see the ratings.” As for this season’s last episode, he said, “If [Dixie] ends, it’s a great series finale. And if it doesn’t end, it’s a great season finale.”

* With Supernatural already renewed for the fall, the network boss made clear: “We are completely open to looking at a spinoff” — even after the last development cycle’s Bloodlines died on the vine. As the producers develop Season 11, “Hopefully, they will come up with something we can use.”

* Pedowitz estimated that Season 3 of Beauty and the Beast — absent from this morning’s midseason premiere news — will arrive in “late May/June.”

* Jane the Virgin is a critical hit, but its numbers aren’t exactly setting the world on fire. That said, “We didn’t have a very high bar on Mondays at 9,” Pedowitz noted. Thus his attitude toward Jane is “let it sit and give it time.”

* Pedowitz acknowledged that while The CW has improved its standing on most days of the week, “Our Thursday night [line-up] got hit by the fact that ABC to their credit… made it tougher,” opening the night with Grey’s Anatomy, leading into buzzy Scandal.

* Asked if a new Star Trek series might wind up calling The CW home, he said, “Hopefully, we’ll be able to look at it” — not that any new offshoot of the TV-turned-film franchise is on the books. “I have heard no discussions about it going out as a TV series, at all.”