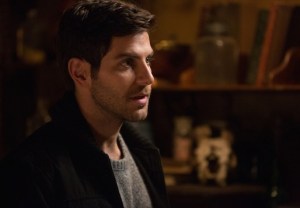 Let’s look on the bright side, Grimm fans: Maybe Nick secretly likes a Juliette on the street and a Hexenbiest in the sheets?

Because if the final few moments of the NBC drama’s fall finale are any indication, that might be a combination he’s going to have to get used to.

It appears the spell Juliette did to help her honey get his Grimm-ness back left her with a lingering case of Adalind-itis, “a major side effect,” star David Giuntoli notes.

Then again, “Isn’t everything a side effect of something in this show? Everything,” he says. “There’s always some hidden side effect, and we’re always in a rush to treat some illness, and we don’t think it all the way through, do we?”

Need something to tide you over until the supernatural series returns next year? Read on for Giuntoli’s take on Adalind’s upcoming visit to Portland, Wu’s Wesen education (finally!) and what he really wants to call the secret group targeting Monrosalee.

TVLINE | We haven’t seen more of Adalind and Nick being able to see through each other’s eyes. Does that come up again in what you’ve seen/shot so far?
Not that I know of. There are even more side effects to Juliette turning into Adalind. There should be, in the Spice Shop, some type of side effects list. We’re in the 21st century. We should be jotting this s—t down. We should also digitize this very soon. As part of Obamacare, we should digitize the side effects.

TVLINE | Adalind is on her way to Portland, and if Juliette morphs back into her, there could be two Adalinds running around the city.
There could be an epic showdown one day between two petite blondes. The featherweight championship of the world, somewhere in Grimm’s future.

TVLINE | You and Claire Coffee shot a love scene, which I imagine neither of you thought you’d be doing anytime soon.
I mean, listen: Yes, Adalind has really gotten around. Captain Renard, Hank and now Nick. Though it really wasn’t Adalind with Nick, but yes, Claire and I never thought that would… [Sighs] Acting is an awkward business from time to time. [Laughs] And sometimes you have to do a love scene with someone who feels like your sister.

TVLINE | We noted how it was a little dirty, at least for your show.
The sex scene?

TVLINE | Yes.
Yeah. The funny thing is, Bitsie [Tulloch] was in the room. She was up next. She did a morph thing. Y’know, workaday business!

TVLINE | When Nick got his powers back a few episodes ago, he turned that zombie gray a little bit.
He did.

TVLINE | Are we ever going to get to the bottom of what that is? Anything coming up about that?
I think as the show goes on and we can kind of build toward a closing point, one day, if we ever know when that is, God forbid that ever happens, I think everything will be answered.

TVLINE | Trubel’s not around in this episode. Will we see her again soon?
I don’t know. We will not be seeing Trubel in the next episode. Hopefully, we will be seeing her down the line. Even more hopefully, she gets her own spin-off show, which I think is great. I can do guest-star [appearances] every now and again. The aging Grimm. I can put my children through Ivy League universities by going on The Trubel Show. 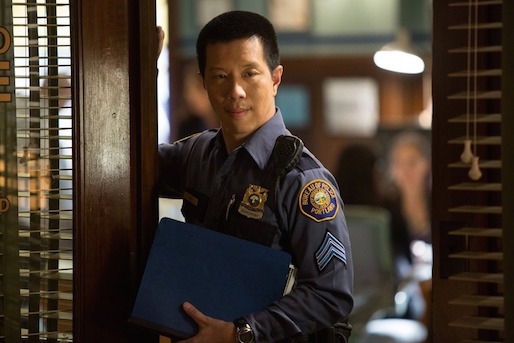 TVLINE | Your aforementioned wish is not going to come true, because Wu now knows about Wesen.
That’s right. Wu knows!

TVLINE | You’ve said you didn’t want that to happen.
I know. I don’t know if I should have said that. But it’s true. I think they did a brilliant job with it, and they know more about what they’re doing than I ever do. I think Reggie did a wonderful job of knowing, of finding out. Poor Reggie Lee now is in practically every scene with Hank and me. So he’s getting a taste of that. [Laughs] But I think it is great that Wu knows. I was scared. I think David Giuntoli fears change, but now that it has happened and the paradigm has shifted slightly, it’s a really cool thing. It’s wonderful to get him in on it.

TVLINE | How does he deal with the new knowledge?
I don’t want to speak for him, but when he’s been through so much torment and mental anguish that the news that this is in fact for real is a little easier to swallow. Reggie’s been playing it like he’s got an eye on us, on Hank and myself a little bit. But he is tentatively accepting this as OK. This is all making sense.

TVLINE | Not if Secundum… I can’t pronounce it. Not if that group has something to say about it.
Secundum Naturam Orden Wesen, which I like to call SNOW.