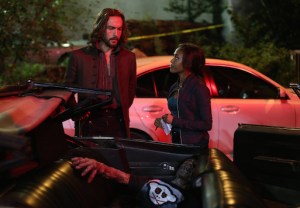 God may have given His Witness Grace Abigail Mills many gifts, but the ability to BS isn’t one of ’em.

So in this week’s Sleepy Hollow, when Abbie’s frustration with Katrina mounts by the second, you can see every single fiber in Lt. Mills’ body ache with the desire to strangle Ichabod’s witchy wife.

Abbie’s urge is easy to understand, particularly when the redhead makes a startling move near the end of the hour. Still, that tricky Katrina, ever the victim enchantress, proves herself a very useful rookie member of Team WTF throughout the episode — so it’s hard to be mad at her for taking action that just might, as Ichabod notes, turn the tide in the ongoing battle against evil.

(For the record, I still don’t trust Mrs. Crane to do what needs to be done. So write that down in George Washington’s Bible or Benjamin Franklin’s sketchbook or wherever you’ll be able to find it when we’re all pleading for mercy in front of Moloch. P.S. — That day looks like it may come sooner rather than later, no?)

Read on as we review what happens in “Heartless.”

RELATED Sleepy Hollow Sheriff Sakina Jaffrey on When — or if — Reyes Will Learn What’s Up: ‘I Want to Go to That Party!’

DEAD SEXY | Let’s get the Nasty of the Week out of the way up front: She’s a succubus, or a demon who seduces the lovelorn and then feasts on their life forces, killing them in the process. Henry summons her and has her troll the thriving Sleepy Hollow club scene (?), among other places, for yummy human essences. By the second time we’ve seen her in action, the succubus’ game plan is clear: She reads a person’s deepest longings and then transforms herself into a vision of their desire. 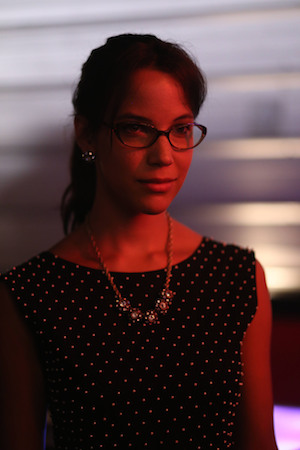 So when a nerdy (read: he wears glasses) guy is too chicken to approach the nerdy (read: she also wears glasses) girl for whom he longs, the sexy succubus makes herself look like the Brooklyn hipster of his dreams. Then they go to his car, where she transforms into a horned beast and gives him a decidedly unhappy ending. And then ol’ Sucky runs back to Henry, where she vomits the bespectacled sad sack’s soul (or whatever) into the same jar of energy that Henry filled at the end of the previous episode. And there’s something in there, but at this point, it’s not clear exactly what.

REALITY SETS IN | Over at Corbin’s cabin, Ichabod and Katrina have a a very flowery disagreement about love… which, as it turns out, is sparked by conflicting views of the Bachelor-like reality show they’re watching while cuddled up on his bed. (Heh.) Katrina thinks the romance in the series is real, while her husband calls it “shameless groundling kabuki.” Though they’re happy to be back together, things are not 100 percent OK between Mr. and Mrs. Crane. As they chat about the past few weeks, he admits that “it pained me to think you were not who I knew,” and notes that secrecy — which she employed to great benefit as a spy and a witch — “is a hard habit to break.” (Side note: I realize, while Ichabod and Katrina talk, that one reason Ichabod and Abbie are so watchable is because she is a tart squeeze of lemon to the meringues with which he embellishes his speech. It’s not Katrina’s fault, but she’s just as ornate as her fancy husband. More than one meringue at a time, and my teeth start to itch.)

They’re interrupted by Abbie busting into the place — and when Ichabod remarks that his partner isn’t interrupting anything, I’d like to you take note of Katrina’s “Oh, really?” face — with information that she’s put a trace on Henry’s Internet usage. Soon, the Witnesses are called to geeky guy’s murder scene, where Crane makes it clear he hasn’t given up faith in Henry. After all, he notes, faith can be rewarded: Katrina was returned to him against all odds, and “So were you.” Aww.

THE WITCH PITCHES IN | Katrina starts being helpful back at the archives, when she looks at the corpse’s wound pattern and realizes something leeched out his life force. But soon after, the witch gets the vapors and has to sit down when she has a vision of Henry standing over a cradle at Fredericks Manor. So Ichabod turns down Chinese take-out in order to escort his (again) ailing wife home.

Abbie eats a sad personal pizza (even the box seems to mock her!) and then consults Hawley… who assumes their meet-up is a date. He says he knows nothing about the succubus in town and then soothes the sting of yet another Abbie turn-down by sliding up to some comely ladies at the end of the bar. The move registers enough with Mills that she mentions Hawley’s desire to “get lucky” to Crane later. Off his puzzled look, she tries to explain what she means, but he quickly infers. “Ah, macking. He was macking on a lady,” Ichabod says, his enunciation so sharp that I’m pretty sure I’ll have the “ck” ringing in my ears for a week.

HEARTSICK HAWLEY | With Katrina’s help, the Witnesses track the succubus to the harbor… wait, that’s where Hawley lives! Yep, the delectable demon Abbie’d herself up and went after the bounty hunter soon after Mills left the bar, and Crane and Mills arrive just in time to save him from turning into nothing more than a pile of ash in an unbuttoned henley. Ol’ Sucky gets away, though.

Ichabod informs Hawley that the creature is drawn to those who hold desire in their hearts. I can’t decide who does a better job of communicating volumes without words here: Matt Barr, as Hawley gazes upon Abbie; or Tom Mison, as Ichabod notices Hawley’s unspoken longing and then puts together that the swaggerific mercenary is pining for his partner. Lovely work all the way around.

TWO WOMEN ENTER… | Crane trips over himself giving Abbie his blessing to pursue something romantic with Hawley, but she thinks he’s insane. Plus, Mills and Crane soon realize they have a much bigger problem than originally thought: Thanks to Katrina’s increasingly specific visions, they learn that the spell that ripped Fetus Moloch out of Mrs. Crane’s babymaker didn’t destroy the demon or send him back to Purgatory — it just shunted his energy somewhere Henry could trap it. So now the Horseman of War is growing his master in a jar until he’s ready to be embodied again, Voldemort-style.

Even better: This news leads to Abbie and Katrina throwing down about who’s a better soldier in the war against evil, and damn if it doesn’t feel good to watch them both finally say what they’ve been thinking since the season premiere. The situation gets so heated that Ichabod literally has to stand between his ladies and beseech them to get along and… Sorry, I zoned out, thinking about who’d win in a witch-vs-Witness brawl. Hey, why don’t we vote?

THERE IS NO ‘I CAN’T STAND YOU’ IN ‘TEAM’ | Armed with the knowledge that the succubus can’t be killed until her heart — which Henry is keeping in a cemetery in town — is destroyed, Abbie and Katrina go to destroy the organ while Hawley and Ichabod go to “Club Twerk” to find her. (And if you want to know some silly stuff about this scene, including who the heck that blink-and-you-miss-her brunette is at the end of the bar, check out my behind-the-scenes post about tonight’s episode.) 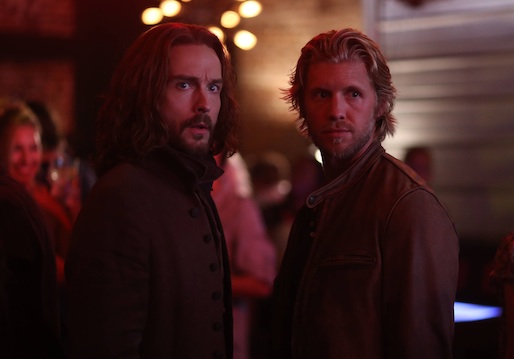 Ich eventually corners the demon in a storage room, but she makes herself Katrina-esque and it stops him long enough for her to start sucking his lifeforce. (Not a double entendre.) Hawley saves him right as the women are successful in their mission, and a few bullets put an end to the succubus. All that’s left is for Abbie to pretend she doesn’t notice what a young buck Hawley is as she’s helping bandage him up, right? (Side note: You totally should’ve given Ichabod your firearm, Hawley, considering you had two massive guns of your own.)

THE EVIL STORK DOES A FLYOVER | Actually, there are one or two pieces of housekeeping to deal with: 1) Katrina has returned to Abraham in an effort to get close enough to Moloch to kill him, and 2) She thinks it’s a really good idea to make Abbie tell Ichabod about this change of plan. Ichabod takes it much better than I expect him to. Maybe that yoga is doing more than firming Crane’s double-jug, because he’s very zen as he explains to Abbie that he must trust his wife.

That said, Ich doesn’t know that at that very moment, an Abraham-chaperoned Katrina is approaching the cradle Henry is standing near, and that inside lies not a disgusting, black baby demon but a sweet human infant. (Perception spell, anyone?) And that look of joy on Mrs. Crane’s face? Troubling, in the extreme.

Now it’s your turn. What did you think of the episode? Hit the comments and tell us!