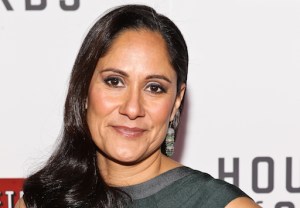 Only when you’ve come from playing House of Cards‘ Chief of Staff Linda Vasquez does portraying a hard-nosed, small-town sheriff seem like a light-hearted vacation.

“House of Cards has its own intrigue and has just as much darkness” as her current gig, playing Sleepy Hollow‘s Sheriff Leena Reyes. “But maybe not that much explanation of why people are dark.”

The Fox drama, she continues, bases its monsters “in a psychological reality, which is a representation of what the characters are going through.” (For example, the succubus plaguing town in Monday’s episode draws attention to the conflicting desires in various characters’ hearts.) And that, Jaffrey says, she finds oddly comforting.

The new sheriff has made many mentions of how she’s in town to restore order; as far as the actress knows, her alter ego is telling the truth. “Whatever you’ve seen of Leena Reyes, she’s a soldier,” the actress tells TVLine. “She thinks she’s there to put an end to the chaos.”

Reyes — whose credits include Girls, Blue Bloods and a recent guest turn on CBS’ Madam Secretary — chatted with TVLine about the lawwoman’s past, her role in the upcoming Lori Mills episode and whether or not Reyes is likely to learn what’s really going on in town.

TVLINE | You played Linda in House of Cards. I’d argue that show is a little scarier than Sleepy Hollow.
You know what? What’s so hilarious is, I actually shot a scene yesterday, and I was talking about Orlando Jones’ character, Frank Irving, and by accident I said “Frank Underwood.” [Laughs] I find this hilarious. It was so funny, because Frank Irving has set himself up to be wrongly accused of something he obviously didn’t do, and [House of Cards‘] Underwood is president now! And he actually did it!

TVLINE | We’ve seen you in a few episodes so far.
I’m in… Monday, and then I’ll be in Episode 13. When I was doing Comic-Con with [showrunner] Mark Goffman, he was very clear about the fact that he wanted somebody to come onto the scene and there’d be no question about her power and there be no question of her authority. But in that, I think there’s a lot of places they can go with her own history. I’m hoping all of that comes out.

TVLINE | What have you been told about Reyes’ past?
One of our co-EPs/writers Albert Kim said, “Well, she grew up in Sleepy Hollow. She had a father who worked at Sing Sing [Correctional Facility] and his demise came because he trusted his inmates at Sing Sing too much, so there’s history there.

TVLINE | Will we see that bit about her background in an episode?
I hope so. I mean, I don’t know why they told it to me unless it was going to come out.

TVLINE | Do you know if she has a partner or kids?
For me, she’s definitely these types who the police officers would never find out anything about her life. She’s incredibly private, certainly like Linda on House of Cards. Her job is her life, but she takes it very seriously… Not to make more of it than it is, but I think Leena sees the inhabitants of Sleepy Hollow — and certainly Abbie — as her children. She just takes it that seriously, and she’s as committed to her mission, which is to save people, as the people on the [supernatural] side. They’re dealing with an apocalypse, but I’m dealing with all these headless bodies in the street!

So, I approach it that way. It’s the only way I can, because to have no humor and be a disciplinary character who’s all business — it’s not that much fun to play. The only way I can play it is if I really, really believe in [Reyes’] mission.

TVLINE | We’re going to meet Lori Mills, Abbie and Jenny’s mom, in an upcoming episode. I imagine your character is involved in that one.
A bit, but not in a way that I think it’s surprising. It’s not what you would expect.

TVLINE | Any word on when/if Reyes will figure out what’s really going on her town?
You know what? I am waiting to hear that I get to have fun with the other side. It hasn’t happened yet, and I’m like, “Damn! I want to go to that party!”