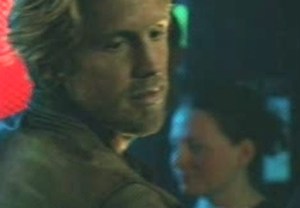 Forget journalism: My glamorous career as a television actress has begun.

I’m in Wilmington to visit Sleepy Hollow which, for today, is shooting on location at a bar downtown. The primary purpose of my trip: Interview the cast —Tom Mison, Nicole Beharie, John Noble, Katia Winter, Lyndie Greenwood and Matt Barr — and watch some scenes as they’re filmed.

The secondary purpose of my trip: Make my mark on the contemporary television landscape by turning in a tour-de-force performance as an extra in a scene shot at aforementioned bar.

THE UN-HIPPEST HIPSTER | The email from the Sleepy Hollow rep came in a few days earlier. The supernatural Fox drama will be working on a club scene while I’m there — as part of a trip attended by three journalists from other outlets — and do I want to be an extra, if time permits? 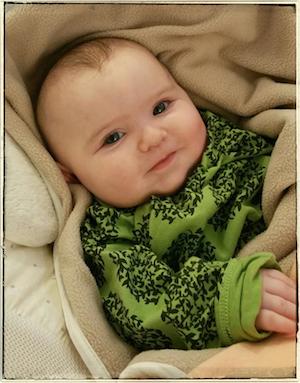 My initial reaction: Hell no. I gave birth to my first child in June (adorable-if-I-do-say-so photo at right), and even though I’m glowing with pride at what a perfect little person she is, I’m severely sleep-deprived and still roughly the size of Arkansas. Not exactly camera-ready, unless they’re looking for another tortured soul to roam Purgatory.

The makeup department wouldn’t even have to put the dark circles under my eyes.

My second reaction: Hell yes. If my 10-year-old, TV-obsessed self could see me now, she’d throw a Nintendo cartridge at my head for even considering sitting this one out. Who gets this kind of fun opportunity? And how jaded do you have to be to turn it down?

So I wrote back to the show’s publicist and let her know I was in. Soon came another missive to the group: “Wardrobe is asking that you bring something that would be worn to a Silver Lake-type club,” she wrote, translating the Los Angeles-centric term for me and the other New York-based reporter, “which is a bit hipster.”

I stressed, panicked and threw (maternity) jeans, a couple of scarves and some chunky black-framed glasses into my carry-on. That would be hipster enough, right? RIGHT?

‘I DON’T LOVE THEM’ | The day of the shoot, the other reporters and I spend the morning talking with the cast in a building adjacent to where Episode 8, “Heartless,” is being filmed. I know my wardrobe selections may not be on point when I see some other extras being herded into the bar — which will be known as “Club Twerk” in the episode. These ladies look like they’re headed to a casting call for a late-’90s Janet Jackson video, all miniskirts and bare midriffs and such.

A few hours later, the call for us to get into our costumes comes while I’m in the middle of a conversation with Winter, so I’m the last one to change. It takes a while — you try maneuvering out of pre-pregnancy Spanx on a hot day in the South — but I’m soon rocking a black T-shirt and the jeans.

Someone from wardrobe looks me over. He is very nice, but I can tell I don’t scream “hipster” when he says, “What else do you have?” I hold up the simple black dress I was wearing earlier. He nods. “Let’s go with that.” 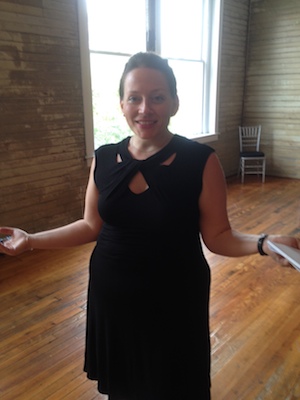 Re-Spanxed and back in my street clothes, I show him my scarves and put on the glasses. His look is tough to read.

“You hate them,” I say, whipping the prescription-less frames off my face.

He shakes his head. “I don’t love them.”

So all of my accessories are nixed, and I head to set with the only thing that differentiates Roots the actress from Roots the journalist: a few bobby pins that transform my ponytail into a messy, club-ready bun, courtesy of one of the show’s kind hair stylists. (See the magic happen at right.)

WALKING, NO TALKING | The sun outside the bar is strong, but thanks to blackout curtains and creative lighting, it’s late evening inside. It’s also really, really hot; the air conditioning has been off while the cameras are rolling, owing to how loud it is. As you’d imagine, the other extras in the scene have been there for a while and look a little bit like they’re melting.

The other reporters and I are placed at the end of the bar and given various instructions: Don’t look directly into the camera, look like you’re having fun during an evening out, that kind of thing. Right before each take, a few seconds of thumping dance music is played, then everything but the bass drops out; the music needs to go so the microphones can pick up the actors’ dialogue, but the beat helps the rest of us look like we’re all grooving to the same song. (Music and background noise will be laid in later.)

A few of us are picked to walk predetermined places at predetermined times, and the anxiety I feel when it’s my turn to do so rivals the jitters I had before my first driving test.

It’s walking, Roots. Walking that could literally cost the production time and money if you screw it up, granted, but still. Pull yourself together. I manage not to break anything or step on Tom Mison’s toes, so I consider it a success. (P.S. No footage of me walking was used.)

WHO, ME? | The scene involves Ichabod and Hawley making their way through the crowd, searching for the succubus that attacked the bounty hunter earlier in the episode. From where I am stationed, I have a perfect view of their exchange, but I’m not supposed to be paying attention to them… even though I believe that a good-looking dude in Colonial attire would probably earn at least an eyebrow raise at even the tren 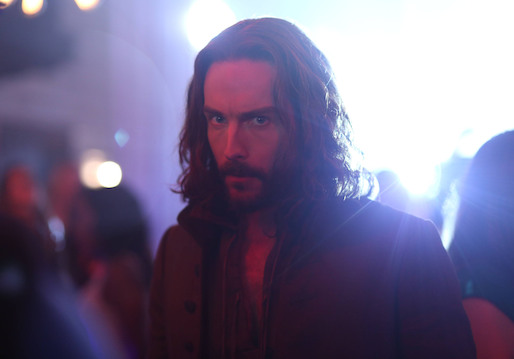 So instead I silently faux-chat with one of the other reporters and cultivate a character who is looking for some friends that promised to show up, but they never did, and now she’s over it. My acting choices involve a lot of squinty scanning of the club entrance, checking my watch and looking bored.

At one point, a male extra in a suit who’s standing farther down the bar catches my eye, smiles and waves to the bartender as though he’s buying me a drink. I react pretty much how I have always reacted to this kind of attention: I blush fiendishly, give a tiny nod of thanks and then avert my eyes for the rest of the time I’m there.

What can I say? I’m Method.

BUT WHAT I REALLY WANT TO DO IS DIRECT | In between takes, crew members train portable fans on Barr and Mison so they don’t start to get as shiny as the rest of us. At one point, Barr lifts his shirt, and a woman wielding one of these fans targets his abs.

This is her job, and it’s a good one.

Mison jokes around with us during a break. “Is this the press section?” he asks, gesturing to where most of us are clumped. But before we can say much, it’s time to go again.

We do a few more takes, shoot the scene from the reverse angle to make sure everything’s covered, and then, suddenly, we’re done. The other extras will funnel upstairs for another scene, which means hours more of sweating and bopping and standing around, but my showbiz entrée has run its course. 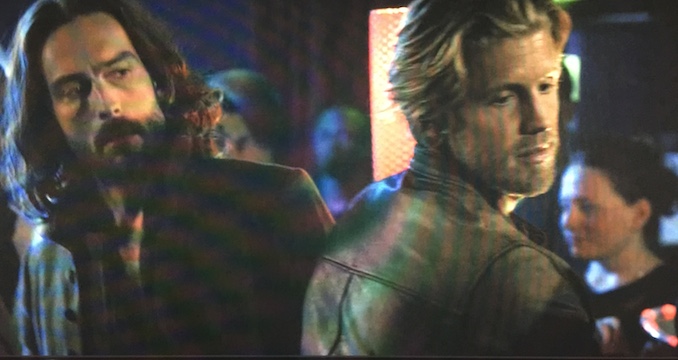 I appear very briefly in the episode; when Ichabod and Hawley are talking in the club, I’m the brunette to the far right in the background in some of the shots (including the one above). It’s enough to give my mom something to brag about at bingo next week, but not quite enough to get me my Screen Actors Guild card. Still, I’m so glad I did it, if only because when I run into Mison a few weeks before it airs, he delivers this tongue-in-cheek review of my performance:

“You’re wonderful in it,” he says, trying (and failing) to hold back a laugh. “I think you made a very bold choice, and you went for it, which is admirable.”