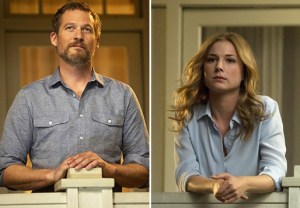 Sunday’s episode of  Revenge staged yet another non-Emily reunion for David Clarke, one which led him to make a revenge speech of his own — albeit a completely misguided one.

During his late-night meeting with Nolan — whose puppy-esque reaction upon seeing his long-lost father figure was actually pretty adorable — David asked why, if Nolan really gave “Amanda” the infinity box, had she apparently been living in squalor above the Stowaway with Jack? (Clearly, David didn’t see Jack’s locker-room scene earlier in the episode. Question answered.)

But because Nolan couldn’t tell David the truth, lest he blow Emily’s cover and spill every last bean, he responded with some Cheshire Cat nonsense about how David should trust his heart, rather than the “trustworthy” people in his life. Sadly, David’s heart is saying that he can’t trust Nolan, as evidenced by the knockout we saw in the promo for next week’s episode. (Seriously, right in the moneymaker.)

Meanwhile, the ever-crafty Ms. Thorne — whose puppet-mastery now extends to real estate dealings — arranged for David to move back into the beach house. It was mostly so she could keep an eye on him, but also to help him relive fond memories — you know, like that time he was torn from his home as his young daughter screamed in utter terror.

But Victoria raised an interesting question during a sadly-no-shotguns confrontation with Emily: How will David react when he learns of all the terrible things his daughter has caused in his name? Will he feel guilty? Will he be ashamed? Or will he, like the viewers, just be annoyed that this reunion took so long?

I guess we’ll find out when Emily and David finally meet, an event currently scheduled for the 12th of Never.

CHARLOTTE GRAYSON: NIGHTMARE PERSON | Oh, Charlotte, where do I even begin? She seems to think that because she has Clarke blood coursing through her veins, she’s capable of pulling off Emily-scale manipulation — but she’s just not. Not even a little bit. She’s a hot, self-destructive mess, which she further proved by telling  the guy who tried to hit David with his car to call her “Charlotte Clarke” before hopping into a cab to score more drugs or whatever. In fact, the only smart thing Charlotte did all week was drop this li’l truth nugget on Jack: “Wow, you’re a terrible cop.” (Sorry, Jack-o, but somebody had to say it.)

MEDIA STUDIES | Realizing that her stable of allies is depleting faster than Teresa Giudice’s bank account, Emily made “peace” with Margaux and tipped her off about David’s big homecoming. Margaux also made a new deal with Victoria for exclusive rights to his story — and all it cost was a tiny piece of her soul. (Then again, how much of a soul could she possibly have left after sleeping with Daniel?) On the bright side, I think she did something new to her hair. Looks great.

‘HOT DAMN,’ DANNY! | On the topic of irredeemable humans, Daniel and Louise dropped their all-business facade and finally got down to business. So you can imagine how pretty surprised that Daniel ultimately chose to align himself with Margaux, instead. … Actually, we can do more than just imagine; Louise’s one-woman show in the elevator — some heavy bruising of the knuckles, lots of super-crazy glances at her reflection, followed by a call to Page Six — was pretty spectacular, and definitely on-brand. I mean, have we forgotten we first met this lady in a mental institution? I love where this is headed.

BEN PLAYS DETECTIVE | In more surprising news, Ben (aka Officer Tight-Ass) came dangerously close to becoming interesting this week, soliciting top-secret files about Conrad’s unsolved murder. Unsurprisingly, his investigation led to Jack, at which point the Chief of Police — whom we know to have close ties with Victoria — caught wind of Ben’s extracurricular activities and promptly shut the operation down. Then he told Ben something really hilarious and completely untrue: “Someday, you’ll get detective.” Yeah, OK.

All right, Revenge-rs, how worried are we about Nolan after David’s little declaration? Is Charlotte not just the worst? And how long do you really think we’ll have to wait for Emily and David to share some air? Drop a comment with your thoughts below.