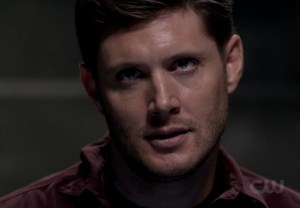 THE PERFORMANCE | You know you’re in for a ride when Supernatural‘s Dean and Sam have a big confrontation — and they’ve had a lot of them over the years. But nothing could have prepared us for the chilling malice that Ackles brought to Tuesday’s demon Dean vs. Sam battle.

It all started with Sam injecting Dean with the cure, eliciting animalistic growls from Ackles that made us want to offer him a glass of water for his sure-to-be hoarse throat. There were moments of proud self-satisfaction as Dean questioned Sam’s actions, goading his little brother with a small smirk as he asked, “Which one of us is really a monster?”

Then Dean pulled out the Mary Winchester card, attacking Sam where it hurts most, and things got really ugly. “Maybe it was the fact that my mother would still be alive if it wasn’t for you. That your very existence sucked the life out of my life,” Ackles said, his voice laced with venom (and pent-up truth?).

But it wasn’t all just nasty words and gut-punch insults. The face-off evolved into a terrifying cat-and-mouse game – expertly directed by Ackles – through the dark hallways of the Men of Letters bunker as the red lockdown lights flashed. Ackles was truly frightening as Dean, hammer in hand, sought out to kill his brother with unnerving determination and eagerness. We hate to say it, but he seemed downright excited to destroy Sam. With every “Sammy!” that he bellowed, we became more scared.

“Personally, I like the disease,” Dean declared, Ackles giving off just the right amount of glee and crazed eyes. And we certainly appreciated the actor’s small touches, like Dean running his hand through his longer demon locks after he finally hacked his way through the door, evoking Jack Nicholson in The Shining.

The power and versatility of Ackles’ skill were magnified when the old Dean, cured of his demon state, returned. Gone were the malevolence and disdain, replaced by guilt and worry. If “lean, mean Dean” equals an even-more-awesome-than-usual Ackles, consider us hooked.

HONORABLE MENTION | In promos for Revenge‘s fourth season, Victoria Grayson bellowed, “Emily Thorne, I’m coming for you!” But it was Emily Thorne who came for us — and our heartstrings — this Sunday as she stood face to face with her presumed-dead father in a police lineup. Like a true dramatic pro, Emily VanCamp managed to condense the immensity of the moment into a single tear that silently screamed down her cheek until she was forced to speak. That final shot of Emily’s face, lip quivering with a mix of shock and devastation, was nothing short of haunting. (Kudos as well to Revenge‘s music department for providing the perfect swelling soundtrack to Ms. Thorne’s utter heartbreak.)

HONORABLE MENTION | It’s not often that we see anyone on Sons of Anarchy expose their vulnerable side. That’s why it was especially moving to watch Jimmy Smits’ Nero — one of the most unflappable men in an ensemble of tough guys — break down at the idea of leaving Charming for good. As Nero begged Gemma (an also-stellar Katey Sagal) to join him at his uncle’s farm and abandon the SAMCRO lifestyle, his hardened exterior gave way to utter desperation as he pleaded, “We deserve something better, Gem.” It was a heartbreakingly quiet moment in a season filled with so much death and destruction.

HONORABLE MENTION | American Horror Story: Freak Show really socked it to poor Ethel this week. In response, Kathy Bates delivered one knockout performance after another. First, she spoke volumes with the way she delivered the bearded lady’s stoic response to her terminal diagnosis: “Well, s—,” she said, as if surprised to find out she wasn’t indestructible. Then, we cried right along with the veteran actress as she allowed Ethel to break down not because she was dying but because her doctor was kind. By the time the so-called freak began settling her affairs (starting with pushing away beloved son Jimmy), the MVP had reaffixed her character’s game face. But the worst — and best — was yet to come. As if she hadn’t had a rough enough day, two-faced Edward Mordrake insisted that she recount the awful story of Jimmy’s birth. The bogeyman wasn’t moved enough (or something) to add her to his “coterie of companions,” but we were so impressed that we fully expect this Honorable Mention to be but a precursor to Bates’ second AHS Emmy win.