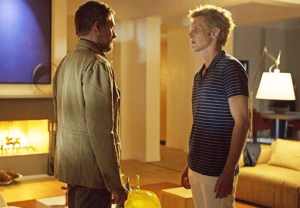 Nolan may be a man of a thousand zingers, but even Emily’s BFF appears to be at a loss for words upon reuniting with David Clarke in this new batch of photos from Sunday’s Revenge (ABC, 10/9c).

RELATED Revenge Recap: Allow Me to Reintroduce Myself

The network has released new photos from this week’s episode, as well as the show’s Nov. 2 installment, which shed new light on the complicated (to put it mildly) relationship between Nolan and David. From the looks of things, Nolan will serve as a liaison between Emily and Papa Clarke until the two inevitably come face to face, though I wouldn’t hold my breath for that anytime soon.

Prior to the Season 4 premiere, showrunner Sunil Nayar told TVLine that David would be “slowly” reintroduced to the Hamptonites, rather than re-entering everyone’s lives at once.

Browse new photos from the coming weeks below, then drop a comment: How do you predict this will all play out?